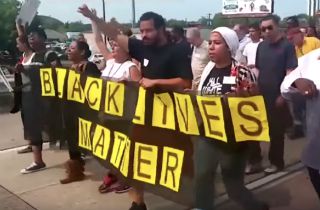 “We’ve heard black lives matter. All lives matter, well, cops’ lives matter too. So why don’t we drop the qualifier and just say ‘lives matter’ and take that to the bank?”

“We get the world we deserve…”

Thanks to a combination of apathy, misguided priorities and absentee leadership, we are getting the world we deserve now, and it’s an increasingly scary one. More disturbingly, it’s also a rudderless one from a leadership and media perspective. And with that revolting chant above, the insult of a movement to anyone with a pulse known as Black Lives Matter should be shunned, mocked and soundly dismissed into irrelevance by members of all races. And for the major media’s part, it’s way past time for BLM to be subjected to serious scrutiny with a large spotlight cast upon it for more than its one-dimensional ability to disrupt campaign rallies. Because if Martin Luther King were alive today, he would be denouncing BLM in about eight seconds. That’s what real leaders seeking real solutions do…

On the cable news front, Fox and CNN are covering the aforementioned BLM chant at the Minnesota State Fair, yes. And conservative media is all over it as well. But where’s the 60 Minutes interview with a national leader of BLM asking for his explanation around the vitriol above? Where’s the major network nightly newscasts playing that chant above for tens of millions to absorb? Where’s the president condemning the movement for attempting to incite violence (and arguably succeeding)? All out to lunch… and adhering the rules of political correctness, which call for looking the other way when any minority group goes way over the line.

Know this: There is no defense for this kind of rhetoric. None. But don’t tell that to BLM’s Minnesota organizer Rashad Turner, who attempted to answer CNN’s Brooke Baldwin’s question around the chant with a classic denial and deflection:

“Brooke – I think that the question we should be asking is: Why so much uproar over rhetoric and not the same uproar over the facts?” Adding later: “I don’t think that anyone with our movement…is promoting violence against police officers. I think a lot of people are disappointed that things were peaceful and they’re looking for something to hang their hats on. Obviously we’re not promoting any type of violence.”

Sorry… but words do matter, and specifically the kind used in Minnesota under Turner’s direction. Because the same morning Ismaaiyl Brinsley murdered NYPD officers Wenjian Liu and Rafael Ramos as they sat in their patrol car last December, he had posted on social media he’d soon be “putting pigs in a blanket.” Fast forward to August 29, where BLM thought it was a fine idea to go out and scream the same sentiment about pigs in a blanket just hours after the news broke of a sheriff deputy being shot in the back and killed, because that PR strategy isn’t profoundly insensitive and impossibly stupid in trying to advance your cause or anything…

It’s obvious we’re heading into dangerous territory now. The race wars that the likes of Dylan Roof and Vester Lee Flanagan are looking to ignite are only fueled by words and chants like this that go largely ignored. Reasonable heads need to prevail here before we have another Baltimore, another Ferguson, or something much worse, something like a wildfire that can’t be controlled.

Major media ignores a movement that openly chants for the death of police officers: How isn’t this a story worth a three-minute package on? And before you say that group in Minnesota is just a rogue chapter, an aberration, ask yourself this: If that’s the case, why hasn’t BLM leadership spoken out against such rhetoric yet? Because they don’t necessarily disagree with the message, that’s why.

The silence is deafening from the places and people that can help turn this thing around. Doesn’t matter if we’re talking BLM leadership, most of the media or a White House that injects itself into situations only when it’s politically expedient and convenient. Note: This isn’t about taking sides. Put away the conservative/liberal/Republican/Democratic crap for five minutes if that’s humanly possible. Protest should be encouraged. Voices should be heard surrounding the lives snuffed out needlessly like Tamir Rice or Walter Scott. The same goes for late officers Darren Goforth and Sean Bolton.

“We’ve heard black lives matter. All lives matter, well, cops’ lives matter too. So why don’t we drop the qualifier and just say ‘lives matter’ and take that to the bank?”

Instead, we get the world we deserve.