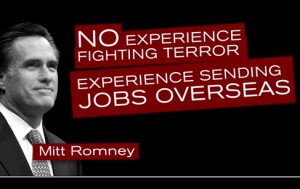 Former Obama spokesman Bill Burton‘s Priorities USA Action PAC continues to strafe Mitt Romney like an ED-209 on a sugar high, this time with an ad pegged to Romney’s recent assembly of a foreign policy team. While the spot cleverly toggles from Romney’s foreign policy chops to his record of exporting American jobs, the real significance of this ad is the fact that it’s the first sign of terrorism as an issue in the 2012 campaign, one that President Obama is well-positioned to run on.

Entitled “Outsourcing,” the spot begins with a clip from a 2008 debate in which Sen. John McCain questions Romney’s readiness, saying “I’ve raised this many times…whether you have the experience and judgment to lead this country in the war against radical Islamic extremism.”

The narrator then explains, “As governor of Massachusetts, Romney vetoed a law that would have prevented outsourcing and stopped taxpayer money from funding jobs outside the U.S. Sending taxpayer money abroad? Outsourcing jobs to foreign workers? That’s not the kind of international experience we can afford.”

Throughout his presidency, Barack Obama has turned the terrorism issue on its head, killing so many terrorists that Republicans even complained about it, killing Osama bin Laden, and many other al Qaeda leaders. On the issue of terrorism, Republicans, especially Romney, really have no response to President Obama. Ironically, though, he’s done such a good job on the issue that Americans might feel too safe for it to do him much good. Still, it can’t hurt to remind them of that safety.