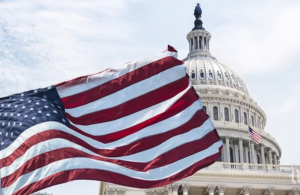 Ever since Alaska and Hawaii were adopted as states in our union, we have flown the current version of the 50-state flag: one star for each our of states, first flown on Independence Day in 1960.

And on this July 4th weekend 56 years later, there is a mounting effort to have the flag redesigned one more time.

Washington D.C. Mayor Muriel Bowser is one of the foremost champions of the proposal, who argues that the 700,000 residents of the District of Columbia are taxed like any other citizens, serve valiantly in our military, and yet have no representative voice in our democratic process.

“Unless the rest of the United States, we do not have a voice in the halls of Congress,” said Mayor Bowser recently. “D.C. residents pay billions of dollars each and every year in federal taxes — more than many states — yet we have no vote in the house, and we don’t have anybody in the Senate.”

If the city wins its bid to join the union as an official state, the name that movement leaders have settled on currently is “New Columbia.” Though, as the Washington Post points out, the name was actually first coined by leaders in an earlier movement for declared statehood in 1982.

“We decided to keep what had been part of the statehood legacy since 1982… If the voters of the new state want to change it, that’s going to be a great thing they can do as a free state,” said DC shadow Senator Paul Strauss. Other names under consideration included “the state of Washington D.C.”, “Potomac” and, “Douglass Commonwealth – an homage to abolitionist Frederick Douglass that would have maintained the District’s ‘D.C.’ abbreviation,” according to WaPo.

Of course, the conversation about adding a new state to the union has far-reaching consequences outside simply adding a star to the flag and re-minting a new series of state quarters. The formation of our democracy is one which includes both proportional and disproportional representation for each state as part of the larger union, and the voting populace of Washington D.C. is heavily liberal. A quick glance at the last several Presidential election shows you the voting tendencies of the people who comprise the district:

You get the picture. It’s unsurprising to learn that this proposal is anything but popular among Republicans, who risk losing two added Senate seats to Democrats in addition to what would likely be one seat in the House of Representatives.

But still Mayor Bowser is undeterred. “It’s going to require that we send a bold message to the Congress and the rest of the country that we demand not only a vote in the House of Representatives,” she said in April. “We demand two senators — the full rights of citizenship in this great nation.”