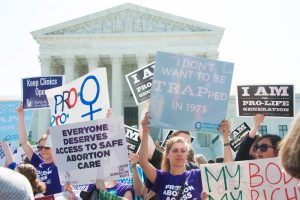 A new Oregon bill meant to protect Oregonians from losing coverage in the face of Republican challenges to the Affordable Care Act is, frankly, conservatives’ worst nightmare. The bill, which The Hill reports will reach the desk of Oregon Gov. Kate Brown (D) in the days to come, will do three powerful things: 1) cover abortion at no cost, 2) protect abortion rights even if Roe v. Wade is overturned similar to laws in California, Connecticut, Washington, Maryland, and most recently Delaware, and 3) cover abortion at no cost for Oregon’s undocumented women, too.

It’s hard to say which part of the bill is most controversial — that it will draw on taxpayer funding to support women seeking abortion, or that this taxpayer funding will also be used to support undocumented women seeking the procedure. It seems to draw on everything today’s conservative lawmakers are hostile to: women having human rights, and undocumented people being treated with dignity and respect.

As a refresher, while Planned Parenthood and other women’s health clinics receive federal funding for the birth control, STI testing, cancer screening, education, and other services they provide, these clinics receive no reimbursement from Medicaid for abortion services. This is due to a dated 1976 law called the Hyde amendment, which bars taxpayer dollars from funding abortion services — except in cases of incest and rape — to respect the personal and religious beliefs of some.

Some 41 years later, it’s hard to say how many low-income women suffered the indignity of unintended pregnancies, or were maimed and injured by attempted self-terminations, or found themselves trapped in poverty after being forced to give birth as a result of the Hyde amendment. Similarly, it’s difficult to keep track of how many millions of born, living adult Americans were slaughtered in taxpayer-funded wars over the past four decades, many of these wars, of course, being advocated for by the same people who oppose abortion by citing their “consciences.”

In the same vein, it’s also difficult to estimate how many undocumented families and their sick children have suffered, even lost their lives, from having no access to health care. But it’s unlikely the simple fact that undocumented people are suffering, struggling, dying, and living in fear will move Republicans determined to ignore their humanity to support their access to health care. Rhetoric — primarily coming from our lovely president — that falsely portrays them as rapists and killers has all but guaranteed this.

Granted, there’s still plenty of pieces of the bill being ironed out. Jonathan Lockwood, a spokesman for the Oregon Senate Republican Conference, was all too quick to pointing this out.

“I don’t believe that most Oregonians are okay with the fact that they will be forced to pay for late-term, sex-selective abortions,” Lockwood told The Hill in response to the bill making it through Oregon’s House. “This bill is nothing more than a political gift card to Planned Parenthood.”

Oregon has the most liberal abortion laws in the country, being one of few states to not have any restrictions on accessing the procedure. According to The Hill, state lawmakers have generally avoided taking up the issue of abortion to avoid the partisan stagnation characteristic of many other state legislatures.

Introduced by state Rep. Julie Fahey (D), the bill will require $10 million and will grant an estimated 22,000 undocumented Oregonians access to health care.

The political scene in Oregon differs vastly from what we’re seeing in Congress, and the majority of Republican-controlled states across the country. Access to health care is being expanded and invested in, and women’s and undocumented people’s rights are being protected by lawmakers. Perhaps this will send a clear message to the Democratic party: There’s a lot to gain from winning over state legislatures.