Gingrich Calls Into Limbaugh’s Show To Explain His ‘Confusing’ Statements 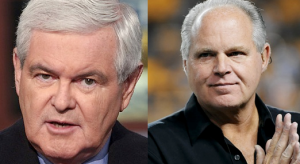 Newt Gingrich is hopeful he can end the week better than it started, and today he tried his best to convince one of his harshest critics just how unwavering his conservative credentials truly are. Rush Limbaugh was all ears, yet judging by his facial reactions throughout the extended interview, it seems like Rush remains skeptical about Newt’s presidential prospects.

Rush was most eager to hear Newt identify his position on the individual mandate in healthcare and explain why he felt obligated to apologize to Republican Congressman Paul Ryan. As Newt’s verbose and increasingly complicated responses were delivered, Rush had some priceless expressions whenever he unsuccessfully tried to interrupt with a new question and even said:

“Newt this is very difficult, you’re on a cell phone and because you can’t hear questions I’m trying to ask you. It’s a bit frustrating for me. . . . This is really uncomfortable for me because you know – we’ve known each other a long time – and I’ve had such, and still do, such profound respect, admiration and even envy for your intellect at times. But there’s just some things that are confusing me.”

“You’re in a little bit of trouble here simply because everybody’s accepting the premise put forth by the liberals that government must fix, must police, must control healthcare because only they can do it fairly.”

Newt also insisted that he did not disparage Ryan’s plan and in fact supports most parts of it, which still left Rush confused as to why then an apology was necessary. Overall, Newt should receive some credit for not backing down from the heat, yet in Rush’s kitchen, it seems unlikely anyone ever walks away looking better than the chef.