Next! Media To Conclude Tea Party Power Has Been Overblown

Next! Media To Conclude Tea Party Power Has Been Overblown 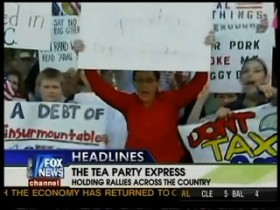 Get ready, it’s about that time. After nearly a month of heavy Tea Party coverage (something needed to fill the HCR gap!), which itself followed months of intermittent Tea Party coverage the media may be discovering they have squeezed all they can out of the Tea Partiers. Cue the new narrative: Actually the Tea Partiers aren’t that important. Oops!

This perhaps shouldn’t come as a surprise. The media can only talk about one thing for so long and after even the New York Times devotes and entire front page and a slew of polling resources to discover exactly who the Tea Partiers are…well there isn’t much place to go after that. So here’s the new meme we can probably expect to hear about from now through the Sunday shows (after that look for immigration to take us through the summer): are the Tea Parties quite the big deal we’ve been lead to believe they are (brought to you by the exact same people who made them a big deal in the first place). Here’s a preview courtesy of Politico, the website that “sparks” the “copycat coverage that can drive a story” and/or throws things up against a wall and sees what sticks. This is likely going to stick.

In some ways, perceptions of the tea partiers have become much like the politician most frequently identified with the movement – Sarah Palin.

For both the left and the right, both have become symbols that outweigh their actual impact – thanks largely to excessive media attention. Conservatives mostly rush to defend them while liberals delight in mocking them, and reporters can’t get enough of the spectacle.

And, as with Palin, the tea parties enjoy an unlikely convergence of saturation coverage from media outlets across the political spectrum.

And just for comparison’s sake:

And just a few years ago, hundreds of thousands of Americans turned out to rally against the Iraq war. Now, veterans of those protests – covered largely as spot news and spectacle – wonder why they didn’t get the weighty, anthropological treatment assigned to the tea parties.

“They’re being treated with a lot more respect than the anti-war movement was,” said Cindy Sheehan, the mother of a soldier who died in Iraq, who became the most visible face of those protests.

Related: Yes, the media should cover the tea parties [WaPo]