Unless you live under a rock, its safe to assume you’ve heard about LivingSocial offering an amazing Amazon.com deal yesterday. In case you didn’t, for $10 you got a $20 Amazon Gift Card. Free money? Sign me up.

And so the sharing began… 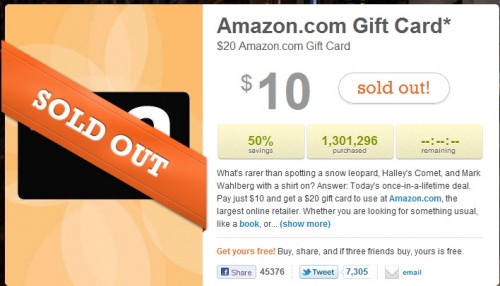 Facebook and Twitter feeds were blowing up, inboxes everywhere were buzzing, and people were buying gift cards to a site they know they would eventually buy something from.

So everyone is wondering, why would LivingSocial give away free money. It is rumored that LivingSocial bought the Amazon gift cards, and didn’t get a break from Amazon.

Here’s my theory of why this was a great play by LivingSocial. I’ll spare you the numbers and will explain the pure marketing/PR genius of it all.

In the past few months, all everyone has been talking about is Groupon.Groupon declining Google’s offer. Groupon raising, like, a billion dollars.Groupon’s potential 15-20B IPO, Groupon this, Groupon that, oh and there are 250 Groupon clones, the top of which is LivingSocial.

In the cluttered daily deals space, LivingSocial just simply wasn’t getting love. Groupon was what people were talking about, and LivingSocial was seen as 2nd place with little chance of catching up. Nothing they did was getting them the mainstream attention that Groupon got. No acquisition, no funding round, no deal was getting them the love, and so, if you want attention, go big or go home.

And big they went.

I can imagine the boardroom meeting went like this. “F these groupon guys, we need attention too. What got Groupon their national attention? The Gap deal. What can we offer that EVERYONE wants? Amazon gift cards. Yes! Cha-ching!”

From an attention standpoint, it worked.

User Acquisition
It is estimated that LivingSocial spends $1.2M a month on Google Adwords. And if you’ve ever been to any website on the Internet, I’m sure you’ve seen their ads or heard their radio spots.

Acquiring users is not easy and costs a lot of money. This was brilliant in terms of an acquisition play.

Why it’s good for Amazon
If you’ve ever shopped on Amazon, you’ll know that you can get free shipping for a $25 purchase. I don’t know anyone that won’t find something to add to their cart to get free shipping. I know people that went ahead and bought a $30 xbox controller just to get free shipping. Does it make sense? No. Do people do it? All the time. Its like walking into Walmart, everything you want is in there, and its so cheap, I could have $20 for free and spend $200. For Amazon this was a no brainer.

Conclusion
I heard the CFO of LivingSocial speak at a conference earlier this year and said: “Any two guys in a garage can start a deal site, but you need capital to make it work and acquire users.”

And LivingSocial did just that. With one deal, they got national attention, mainstream media coverage, over 1M subscribers, and are the talk of the town.

Limor Elkayam is the Founder and CEO of Dealery.com, a daily deals aggregator, and Spotery.com, a curated social news aggregator.  Limor has 5+ years of experience in the ecommerce space and strives to make consumers lives on the web easier by creating time saving ways to consume the web’s expansive content.