Niche Election Humor Is Usually Awful, but TedCruzForHumanPresident.Com Gets It Right 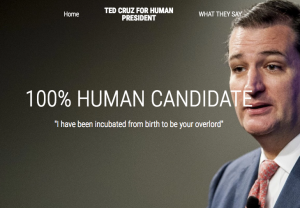 A few weeks ago, a friend sent me a weird link. It was for a website that was called Ted Cruz For Human President and since I have never turned down a potentially unsettling experience on the Internet, I clicked it. I loved it.

Click it now. I don’t want to ruin it for you by explaining it second-hand. The site is simple, but hilarious. Maybe it’s the names of the people “quoted” at the bottom. Maybe it’s the joke about the kid on wheeled shoes or the joke about the telescopes. I don’t know. It’s all great and what makes it that much better is that it is so disarmingly minimalistic. The jokes don’t beat the reader over the head. They aren’t tired. They’re quick and punchy.

Ted Cruz‘s identity has been a punchline all campaign season. He is constantly being accused of being the Zodiac Killer, for instance, in a joke that just won’t die. Then, there’s this tweet, which goes around every few weeks:

Something about Cruz just lends itself to these jokes about whether he is a murderer or a bunch of scheming kids or, in this case, someone who has to defend that he is a “100% human candidate.” Like the “three toddlers stacked” joke, Ted Cruz For Human President sees resurgences in popularity every few weeks.

I wanted to know why the gag is so evergreen, so I reached out to the site’s creator, Deno DeMartino, who explained that he got the idea for the site when he found this piece on Gawker that linked to hours of raw footage of Cruz “[seeming] like this was his first time interacting with other people.”

no snark guys, i am really stoked that people are liking the dumb website that I built.

This is DeMartino’s first “full-blown parody site,” though he does do pranks on social media from time to time. He described Ted Cruz For Human President as “far and away” his most successful online project. Then, he said this:

I didn’t have an agenda while making it beyond making people laugh. It brings me great pleasure to think that I made a lot of strangers laugh in the last 24 hours.

I don’t think I am going to change anyone’s mind regarding Ted. If you saw the site, you are more than likely not a fan of his. His supporters are probably too busy at their local AARP and/or witches cabal meeting to have seen it.

So, there you have it. Deno DeMartino wants to make people laugh and is a comedian. Ted Cruz wants to destroy the space program and is a human.