No, Rick Perry Didn’t Accidentally Try To Call On A Mannequin During A Campaign Stop 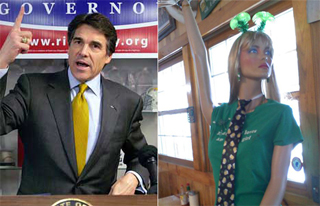 Sometimes some stories are just too good to be true.

Earlier today, the Los Angeles Times posted a write up of a campaign stop that Rick Perry made at the South Carolina restaurant. At the bottom of the article, the reporter made a brief reference to Perry accidentally trying to call on a mannequin during a question-and-answer with the audience. As you can imagine, the Internet promptly exploded. However, we’ve called the restaurant and, like I said, some stories are too good to be true.

“After Perry left, walking by a mannequin wearing a Squat N’ Gobble T-shirt whose hand was raised above her head – a hand Perry tried to call on during a question-and-answer period — a spirited discussion broke out in the restaurant, with some patrons waving Nobama ’12 bumper stickers. It was resolved, it seemed, after they determined that someone had left without paying their bill – and a Perry staffer agreed to pick up the tab.”

The idea of a presidential candidate, no matter who they are, accidentally talking to a person made of plastic is the kind of thing that the media lives for. So, within minutes, the posts started appearing. However, while we’ve all been good political bloggers this year, I wasn’t sure we’d been good enough for karma to reward us that well. So, we started looking into the story.

Sure enough, the Facebook page of the restaurant, Bluffton’s the Squat N Gobble, features a number of pictures of a mannequin in different outfits. Apparently it’s a mascot of sorts. Could this have actually happened? Well…no. When we called the place, we were informed that the story wasn’t what it appeared. A woman named Michele who was quite friendly but clearly sick of this story already, informed me that Perry was just joking when he called on the mannequin (whose name is Squat, by the way).

Oh, well. At least this gave the blogosphere a quick excuse to get out all of their Kim Catrall and Andrew McCarthy jokes. Those things had been bottling up for a while now.