In the wake of numerous bills bubbling through state legislatures focusing on LGBT rights, a North Dakota newspaper decided to call out the legislators who voted against a bill that would have extended anti-discrimination laws .

According to The Forum, the Fargo-based paper that published the attention-grabbing cover, the bill would have explicitly prohibited discrimination based on sexual orientation, but was rejected by a two-to-one vote, sparking outcry both among Democrats and the dozen Republicans who voted in its favor. Even Governor Jack Dalrymple (R), likely mindful of the recent backlash against a religious freedom law in Indiana, spoke in the bill’s favor: “I’m concerned that we have missed an opportunity to affirm what North Dakotans already believe, which is that discrimination based on an individual’s sexual orientation is not acceptable.”

But the bill’s opponents perceived it as largely unnecessary:

Rep. Robin Weisz, R-Hurdsfield, who carried the bill from the House Human Services Committee with an 11-2 do-not-pass recommendation, said the committee listened to a lot of testimony on the “perceived” idea that discrimination is rampant in North Dakota, but “did not receive any testimony that showed any outright discrimination going on.”

“If we’re going to add this as a protected class, we need to be sure that we’re solving a problem,” he said.

That drew a sharp response from Democrats, who referred to the more than 20 people who testified in favor of the bill, including some who traveled across the state to share stories of being mistreated at work because of their sexual orientation or gender identity.

Rep. Joshua Boschee, D-Fargo, a bill sponsor and the state’s first openly gay lawmaker, said that while the discrimination may not be blatant, “We know that it’s happening.

“People have testified that it’s their religious right to do so,” he said. “So what more evidence do we need to say that we need a path for people to visit with their government and say, ‘This happened, will you help me out?’ ”

Click below for a larger version, via the Newseum: 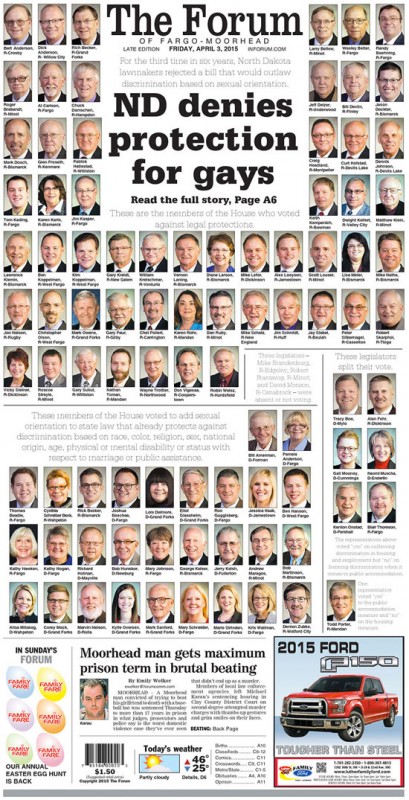