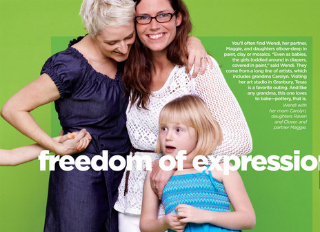 Hey, remember that time conservative group One Million Moms went after JCPenney for hiring openly homosexual Ellen DeGeneres as its spokeswoman? If not, let’s do a quick recap: the group accused JCP of “jumping on the pro-gay bandwagon” by hiring DeGeneres, and thus turning the company’s back on loyal “traditional values” customers. Powerful people like Bill O’Reilly defended DeGeneres from the group’s “witch hunt,” and the angry moms eventually backed down and claimed they will focus on “other issues.”

Well, it didn’t take long. They’ve found another issue; and (surprise!) it’s with JCPenney again! They write on their website:

[JCPenney’s] May catalog shows they are making a strong effort otherwise. On pages ten and eleven, under the title “Freedom of Expression,” you’ll find “Wendi and her partner Maggie and daughters” and again “Wendi, daughters Raven and Clover, and partner Maggie” in text. In the picture both women are wearing wedding bands.

This must mean JCPenney is taking sides in some Great Culture War, by portraying those seemingly happy homosexual couples wearing JCP clothing!

Last time OMM contacted JC Penney store managers, we were brushed off. Some even experienced in person the store manager saying “Thank you” and walking off while their customer and our concerned members were in mid-sentence. OMM has been told that JCP corporate office told store managers to say “Thank you” and then walk away. If they want our business, then we will not be ignored!

Yeah, I can imagine how creepy it is to work at JCPenney and have some random person with pamphlets approach you saying “Did YOU know that JCPenney is in bed with the homo agenda?”

Look, I’m all for the free market expression of dissatisfaction with a company. So long as you don’t call for government to regulate homosexual-depicting advertising, then have at it!

But, really: it’s 2012. Get over it. Homosexual people exist. And they consume goods too.