Not The Onion: China Cracks Down on Funeral Strippers
video

Not The Onion: China Cracks Down on Funeral Strippers 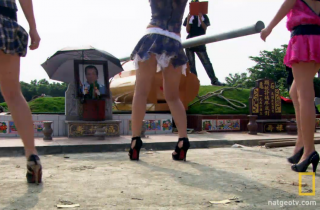 As the headline suggests, this is a real thing: Chinese families often hire strippers to dance graveside at funerals. And now the Chinese government wants that to stop.

The Wall Street Journal‘s China Real Time blog reported Thursday that the country’s Ministry of Culture will “work closely with the police to eliminate such performances, which are held with the goal of drawing more mourners.”

Pictures of a funeral in the city of Handan in northern Hebei province last month showed a dancer removing her bra as assembled parents and children watched. They were widely circulated online, prompting much opprobrium. In its Thursday statement, the Ministry of Culture cited “obscene” performances in the eastern Chinese province of Jiangsu, as well as in Handan, and pledged to crack down on such lascivious last rites.

According to a China Central Television report, funeral hosts hire the strippers to attract more people to attend the funeral. “CCTV found about a dozen funeral performance troupes offering such services in every village in the county, putting on as many as 20 shows a month at a rate of 2,000 yuan ($322) a pop,” the WSJ reported.

Donald Trump may think the United States is losing economically to China, but at least he can’t say we’re losing to them on the freedom scale: If an American wants someone to twirl on a pole or strip naked next to their casket, they can most assuredly have it so.

Watch a piece on similar funeral stripping practices in Taiwan, below via NatGeo: