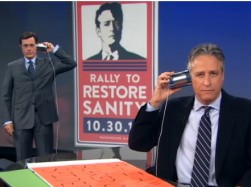 This is interesting. NPR has just issued a memo to its employees reminding them of the company’s ‘News Ethics Policies and Social Media Guidelines’ and noting that these policies prevent them from attending Jon Stewart’s upcoming ‘Rally to Restore Sanity.’ From Romenesko:

NPR journalists may not participate in marches and rallies involving causes or issues that NPR covers, nor should they sign petitions or otherwise lend their name to such causes, or contribute money to them. This restriction applies to the upcoming John [sic] Stewart and Stephen Colbert rallies.

You can read the full memo below. What’s interesting here is that NPR clearly believes Stewart’s rally is, at its core, a political one (“involving causes or issues”), and not merely an opportunity for the popular TV host to do a satirical Daily Show performance writ large. Or a chance for Stewart to promote new book Earth in a big way. Just as a point of reference, here’s how Stewart describes the rally on his website.

If we had to sum up the political view of our participants in a single sentence… we couldn’t. That’s sort of the point. Think of our event as Woodstock, but with the nudity and drugs replaced by respectful disagreement; the Million Man March, only a lot smaller, and a bit less of a sausage fest; or the Gathering of the Juggalos, but instead of throwing our feces at Tila Tequila, we’ll be actively *not* throwing our feces at Tila Tequila. Join us in the shadow of the Washington Monument. And bring your indoor voice. Or don’t. If you’d rather stay home, go to work, or drive your kids to soccer practice… Actually, please come anyway. Ask the sitter if she can stay a few extra hours, just this once. We’ll make it worth your while.

No word on whether NPR issued a similar memo prior to Glenn Beck‘s rally in August…I’m going to hazard a guess it probably wasn’t needed. Full memo below. NPR head Vivian Schiller‘s note here.

As we head into the final weeks of this political season, I thought it would be valuable to send out a reminder of what NPR News Ethics Policies and Social Media Guidelines are regarding political activity. These are the relevant excerpts from the full documents that can be found online.

Please review carefully and if you have any questions please talk to your direct supervisor.

* NPR journalists may not participate in marches and rallies involving causes or issues that NPR covers, nor should they sign petitions or otherwise lend their name to such causes, or contribute money to them. This restriction applies to the upcoming John Stewart and Stephen Colbert rallies.

* You must not advocate for political or other polarizing issues online. This extends to joining online groups or using social media in any form (including your Facebook page or a personal blog) to express personal views on a political or other controversial issue that you could not write for the air or post on NPR.org.

* NPR journalists may not serve on government boards or commissions.