NPR to Reporters: Stop Using the Term ‘Obamacare’ So Much

NPR to Reporters: Stop Using the Term ‘Obamacare’ So Much 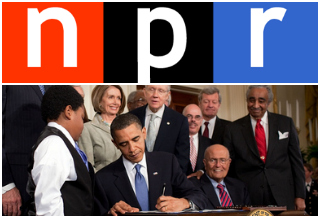 Is it “Obamacare” or the “Affordable Care Act”? The terms have become increasingly interchangeable since it was first signed into law in 2010. But as we learned from Jimmy Kimmel last week, Americans don’t necessarily realize they’re the same thing. Now, one major news organization is taking steps towards a clarification on when to use each term in its reporting.

NPR’s standards editor Stuart Seidel has sent a memo to editors and reporters asking them to “avoid overusing ‘Obamacare’” and make sure that the first reference to the law in all pieces is the “Affordable Care Act.” The memo came in response to a letter from the Maynard Institute’s Richard Prince who said “the term can no longer be defended as neutral.”

“‘Obamacare’ seems to be straddling somewhere between being a politically-charged term and an accepted part of the vernacular. And it seems to be on our air and in our copy a great deal. (I haven’t counted, and I’m not going to count: numbers don’t add up to good journalism.) But word choices do leave an impression. Please avoid overusing ‘Obamacare.’ On first reference, it’s best to refer to the ‘Affordable Care Act’ or ‘the health care law.’ On later references, feel free to use ‘Obamacare’ but mix it up with other ways to refer to the law.”

President Obama himself famously embraced the term “Obamacare” in the run-up to the 2012 election. “I have no problem with folks saying ‘Obamacares,'” the president said at a town hall event in 2011. “I do care.” But some pundits, including NBC News’ Chuck Todd, believe Obama made a “complete mistake” in embracing “Obamacare” because it inevitably “politicizes” the issue.

Despite these facts, most news organizations continue to use the two terms interchangeably without recognition of the differing connotations they elicit. As the government shutdown, which brought into being by the fight over “Obamacare,” continues into its second week, NPR is attempting to address the issue.

“‘Obamacare’ was coined by opponents of the law and is still used by them in a derogatory manner. It’s true that the White House, and even [President] Obama himself, have used the term on occasion. But the administration hasn’t totally embraced ‘Obamacare’ and still uses the Affordable Care Act much of the time. We’re sticking with our previous approach to ‘Obamacare’: AP writers should use it in quotes, or in formulations like ‘the law, sometimes known as Obamacare, provides for …'”