The Essential Debt Ceiling Reading List: What Will Happen, How Bad It’ll Be, and How to Save It

The Essential Debt Ceiling Reading List: What Will Happen, How Bad It’ll Be, and How to Save It 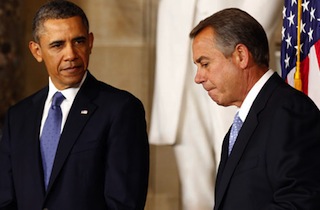 Are we going to default? What would it mean if we did? Where am I?

These are all good questions about the debt ceiling, a strange political and economic hangnail that even many of the legislators charged with caring for it don’t entirely understand. Here’s a very-incomplete primer about what’s going to happen next, how bad it’s going to be, and whether we can get out of it.

The Breach Would Be Like “A Nuclear Bomb”… (Bloomberg Business)

BB runs down every possible consequence of defaulting, which it explicitly calls an “economic calamity”: a global stock market collapse to rival or beat the one that followed Lehman’s implosion, the denigration of Treasury bills, the destruction of the repo market, higher borrowing rates, a less active housing market, and a freefall of consumer confidence.

Certain hardline GOP members have been working on a strategy to induce a showdown over Obamacare since the start of the year. But most figures focused on using the continuing resolution as a line in the sand. So why are we suddenly talking default?

Because a lot of the group intent on stopping the Affordable Care Act don’t particularly appreciate the consequences of breaching the debt ceiling. Daily Beast’s Michael Tomasky writes:

The Republicans’ insouciant stance on the substance of the thing goes back to 2011. The journalist Robert Draper reported an amusing-horrifying episode in his book on the 2010 class, Do Not Ask What Good We Do. The party leadership brought in Republican economists to tell them how awful a default would be. The government would be able to pay only about half its bills, federal prisons would be shut down, interest rates would shoot through the roof. They were largely unmoved, Draper wrote.

Now, Yoho is ready for a bigger fight. He doesn’t want to raise the debt ceiling — ever again. The experts, and Republican leaders, say that would trigger a financial catastrophe.

But Yoho didn’t listen to them about the shutdown. And look how that turned out.

“I think we need to have that moment where we realize [we’re] going broke,” Yoho said. If the debt ceiling isn’t raised, that will sure as heck be a moment. “I think, personally, it would bring stability to the world markets,” since they would be assured that the United States had moved decisively to curb its debt.

We just went through this in 2011, when the prospect of default finally scared the two parties into a budget compromise neither of them wanted (hullo, sequestration). But Business Insider’s Joe Weisenthal argues that the contretemps could be explained away by the hangover of the financial collapse (though he certainly doesn’t argue that you should explain it away), in which residual fears about the economy led to panicky measures.

2013 doesn’t have these excuses. The economy is getting better (though yes, it’s still disappointing). The GOP fared very poorly in the last election. And the deficit is shrinking fast.

And yet: things aren’t going any better on the debt ceiling front.

So what we know now is that we can’t attribute the events of 2011 to some one-off fluke that was the result of bad times. Politically, this is the new “normal.”

One party takes the maximalist position, and then decides its going to take the country hostage as its prime negotiating tactic. There’s no reason to think, if a “deal” is struck this time, that this won’t happen again in 2014, 2015, and every other time the debt ceiling comes up.

This is an emerging narrative: that the debt ceiling itself is a structural flaw that allows ideologically intransigent factions of a major party to disrupt economic functions. “The debt ceiling is the fiscal equivalent of the human appendix — a law with no discoverable purpose,” Henry Aaron of the Brookings Institute wrote.

…so Obama Should Invoke the Fourteenth Amendment (Atlantic Monthly)

So what’s to be done? The specter of the Fourteenth Amendment —which states that “the validity of the public debt of the United States, authorized by law, including debts incurred for payment of pensions and bounties for services in suppressing insurrection or rebellion, shall not be questioned”—is being raised again, as a potential way for President Barack Obama to unilaterally avoid default without Congress. Obama has ruled this out, as he did back in 2011, but some feel his hand may be forced this time around. Via Garrett Epps:

It would be in the economic sphere the rough equivalent of a sudden attack on the United States. No one would question that a commander-in-chief could respond to such an attack — even if Congress refused to act in the face of the threat. In that situation, the members of Congress, not the president, would be in violation of their oaths.

If a president sits by and allows the world economy to collapse, that president might be held to have violated his oath. If a president refuses to sit by, the same charge can be made. In either case, the question could only be resolved by impeachment proceedings. After that, we will know who has the power, for good or ill.

If I were president, I think, I’d rather be impeached for acting than for standing by.

The Markets Could Also Be a Useful Corrective (The Reformed Broker)

The Reformed Broker takes us back to 2008, when the economy was teetering, and reminds everybody that hawks at the time objected to the government’s intrusion into the economy via Hank Paulson’s plan to purchase $700 billion in mortgage-backed securities and the first TARP vote failed.

This was the bloodbath that the pols needed to see, unfortunately. It made headlines around the nation and around the world. Federal Reserve chairman Ben Bernanke met with Congressional leaders, pointed at the destruction and told them the sky would absolutely fall without a bailout. He was right. Inaction was never an option.

A few days later, now scared straight, the Senate passed a revised version on the evening of October 1st with Wall Street’s plunge fresh in everyone’s minds. The House got another crack at the TARP vote on October 3rd and this time it passed 236-171. 63 Dems and 91 Republicans had still voted no, but common sense triumphed. Bush signed it a few hours later and the markets eventually stabilized.

TRB sees us at a similar edge right now. “This morning, there are signs that the equity optimism may have reached its limit,” he writes. “If so, I would say that this is a good thing. Every once in awhile, the business community – as manifested by the Dow Jones Industrial Average’s daily closing price – needs to remind Washington who the boss is. A sudden 3-5% correction for stock prices would almost certainly send a message strong enough for even the most intransigent pols to notice.”

China is Not Pleased… (Financial Times)

China, which holds 1.28 trillion in American debt, is not happy about the prospect of default, and made its thoughts known for the first time Monday morning.

“As the world’s largest economy and an issuer of the world’s major reserve currency, it is important that the US take credible steps to address its dispute over the debt ceiling in a timely fashion and avoid a default,” said Zhu Guangyao, vice-finance minister. ”We hope that the US economy will be able to overcome the grave challenges it now faces and put an end to such disputes so as to sustain the economic recovery process in the US and for that matter the process of global economic recovery.”

Tensions over the shutdown came to a head this weekend at an American Crossroads gathering, as the chance of default made what many high-level donors considered a foolish strategy into a dangerous one.

“The donors I raise money from understand the vital importance of credit markets and are upset that the U.S. credit system is being put at risk,” one fundraiser said.

“There are a lot of major donors who feel that until the Republican party can field people who have a vested opinion of what to do and to do it in a prompt and efficient way, we’re going to withhold giving money,” another said.

So is There a Way Out of This? (The New Republic)

The New Republic’s Noam Schieber, who’s been on top of this fiasco since day one, nails it: Obama needs to offer House Speaker John Boehner (R-OH) a token concession, so that the latter can extricate his party from this mess without seeming like he’s retreating. But if Obama gives away a single substantive concession, it will incentivize Republicans to pull these shenanigans every time the debt limit must be raised, guaranteeing us regular chaos. So: when is a concession not a concession?

In essence, I think Obama can basically give Republicans a trumped-up, impressive-sounding version of what he’s already offered: You guys reopen the government and raise the debt limit, and then I will dispatch my vice president and my entire economic team to negotiate face-to-face with Paul Ryan over a long-term deficit deal every week for two months (or whatever), after which they will report back to me, and John Boehner and I will discuss what they’ve come up with. Obama would have essentially offered no concessions for the reopening of the government and the raising of the debt limit. He will have committed to no cuts and no deficit-reduction targets of any kind. But he will have given Boehner a fig leaf that he can show his rank and file to persuade them that this whole suicide mission wasn’t entirely futile.

What Obama can’t do is offer any substantive concession in exchange for reopening the government, or any concession at all (substantive or not) for agreeing to raise the debt limit. As the president and others have observed, capitulating on this point would completely upend our system of government, allowing the opposition party to impose an agenda it has neither the votes nor the popular support to enact.

We better hope he does. Or else…

The Guardian’s Michael Cohen on what happens if Obama does give in, even the slightest bit:

Unless the GOP’s brand of extortion politics is thwarted, America’s democratic institutions will be so badly subverted that the nation will simply find itself in the position of staggering from one manufactured crisis to another with potentially both political parties threatening economic and political Armageddon if they don’t get their way. That is, quite simply, no way to run a democracy and it’s why the only option facing President Obama and the Democratic party is to win this showdown and force the GOP to concede defeat.

[snip] If they don’t, Republicans will do it over and over and over again. Just as they are doing it again right now after they got a quarter loaf from the president in 2011. Moreover, what reason would there be for Republicans to ever moderate their politics? They wouldn’t even need to win presidential elections. As long as they could hold on to their majority in the House (a majority lubricated by gerrymandered and polarized districts that encourage Republicans to take even more radical positions to appeal to their conservative supporters), they could simply hold the country hostage every couple of years to get their way.