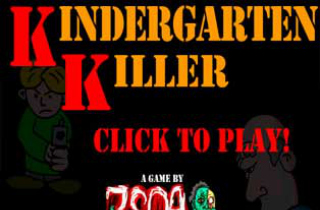 During his truly bizarre press conference this afternoon, National Rifle Association CEO Wayne LaPierre blamed everything under the sun for last week’s Newtown massacre. From “blood-soaked films” to violent video games to the mainstream meda, LaPierre pointed a finger at every cultural “culprit” he could think of except for the person most responsible: shooter Adam Lanza himself.

LaPierre’s speech disturbed not only liberals, for obvious reasons, but also a lot of conservatives and libertarians who found his finger-pointing at video games and movies wrongheaded, and his suggestion that we send armed officers into schools to be… disturbing.

While he went on an anti-video game tirade, LaPierre singled out a few particular games, including the oft-vilified Grand Theft Auto… and a little-known “game” called Kindergarten Killer.

Calling video game violence a “dirty little truth that the media try their best to conceal,” LaPierre described Killer as a game that’s “been online for 10 years,” before taunting the media: “How come my research department could find it and all of yours either couldn’t or didn’t want anyone to know you had found it?”

Gee, Mr. LaPierre. Want to know why no one cared about it? Because it is neither a real “video game” in the traditional sense, nor was it ever popular or available for sale. It was just some flash web browser-based program developed ten years ago as a middle-finger to the bureaucrats who wanted to regulate violent video games in the wake of Columbine and other mass shootings.

Killer was originally posted to Newgrounds.com in 2002, as BuzzFeed reports:

Newgrounds, a portal for flash animations and games, was at the time a haven for intentionally shocking material — it hosted games and cartoons lampooning Teletubbies, Britney Spears, and other pop culture icons, often violently. It was amateurish and sometimes repellent, but above all in on the joke — a sort of small-scale 4chan of its day. Kindergarten Killer is an offensive and awful and pointless game, but in the context of Newgrounds, in 2002, it was likely intended less as a game than a simple provocation: Blame this game for something. I dare you.

Of course, the fact that the game was neither popular nor had any real commercial value whatsoever did not deter LaPierre from using it as a scapegoat. It’s almost as if LaPierre literally turned to his “research department” and said, “Find me a bunch of video games with outrageous names regardless of whether anyone’s actually played it ever.”

Another interesting nugget about Kindergarten Killer is that it featured armed students firing back at you: 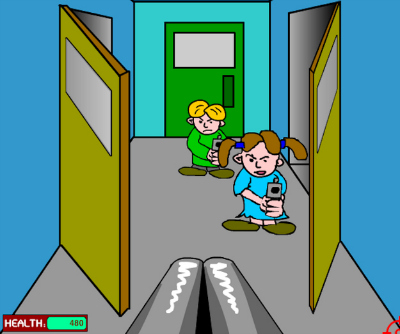 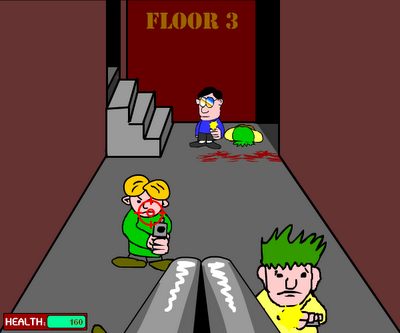 In the end, what’s more disturbing than this clearly provocative yet unimportant video game is LaPierre’s attempt to demonize the gaming industry by citing it as some sort of bellwether for the culture. And, of course, LaPierre’s finger-pointing at video games, movies, and popular media is just downright wrong: study after study has found no link between on-screen violence and actual violence.