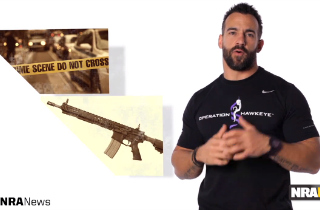 Back in my day we didn’t have fancy specific words to describe things that happened. We spoke in the broadest possible language available in order to tell eternal cosmic truths about morality. Dom Raso, former Navy Seal, and NRA commentator knows what I’m talking about. He blasts the propagandists on the left in his latest clip for NRA News for their agenda-driven insistence on specificity.

“When someone commits a murder, it used to be a murder right?” Raso, the only semiotician in the history of the world to dead lift 600 lbs says. “Now they race to label anything with a gun as a shooting. Because they know how much attention they’re going to get with that word.”

I know I personally only tune into news coverage about horrifyingly violent events when the word shooting comes up. Otherwise it’s like zzzzzz. Ten dead? Where’s the gun? And why do we call them rapes, come to think of it? It’s simply an assault. Are we going to criminalize all sex acts now just because some of them are used to cause pain? Just doesn’t make sense.

He goes on: “Think about the difference between a shooting and a murder. In one you have shooter, and in the other one a murderer.”

Okay, but what’s the difference?

“All the sudden, instead of focusing on the real common link between all acts of evil, the evil person who did it, we are subconsciously told to think about the tool they used instead,” Ferdinand de Squat Rack explains.

One evil person is at the heart of all acts of evil?!

“Evil is the problem, the tool is irrelevant.”

Funny, I was just thinking the same thing vis a vis tools.

Nuance, you see, is for people trying to sell you something, which is why gun advocates never make a big deal about the specificity of a gun in question used in a shooting. Calling a specific brand of murder a shooting is bad, but anything less than detailing the exact make and model of the type of gun used is an affront, not only to the 2nd Amendment, but also the very foundation of language. Or something.

Raso then goes on to explain the specific type of gun used in what he calls “the Navy Yard shooting.” Wait, I thought we weren’t supposed to call them shootings? You see how insidious the left’s campaign on language has become? Raso can’t even refrain from using its jargon in his own editorial about not using its jargon. It’s almost like the things he’s saying here don’t have any meaning whatsoever.

Watch below, via NRA News: