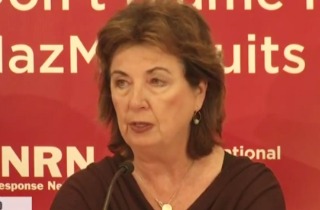 The nurses’ union National Nurses United spoke out today with some serious criticisms of the way the government has been handling the Ebola outbreak. This comes on the day it was revealed a second health care worker who was treating Texas Health Presbyterian Hospital patient Thomas Duncan has contracted Ebola. This nurse is being sent to Emory for treatment.

Union president RoseAnne DeMoro called these past few weeks “a nightmare” for nurses across the country and said, “We’ve been told a lot of things that have been wrong. We’ve been lied to, in terms of the preparation and the hospitals, and we know this because the nurses are telling us this and the nurses are the ones taking care of the patients.”

She said the White House and CDC have ignored their concerns and found it outrageous that the onus is on nurses instead of the government to have the proper protocols in place to protect health care workers.

NNU also put out a statement from anonymous nurses at Texas Health Presbyterian. They claim that protocols for what needed to be done were incredibly unclear:

No one knew what the protocols were or were able to verify what kind of personal protective equipment should be worn and there was no training.

Subsequently a nurse supervisor arrived and demanded that he be moved to an isolation unit– yet faced resistance from other hospital authorities.

Lab specimens from Mr. Duncan were sent through the hospital tube system without being specially sealed and hand delivered. The result is that the entire tube system by which all lab specimens are sent was potentially contaminated.

You can read that full statement here.

And you can watch part of DeMoro’s comments here, via the Associated Press: