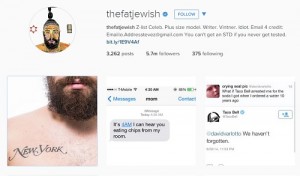 Following last week’s news that Josh Ostrovsky — otherwise known as “The Fat Jew” and “The Fat Jewish” on Twitter and Instagram respectively — had signed with CAA, the Internet revolted. Why? Because several well-known comedians and writers had long accused the Internet celebrity of stealing jokes.

Ostrovsky finally broke his silence in an exclusive interview with New York Magazine‘s Vulture blog on Friday, and it’s rife with unintentional hilarity. Whether or not he stole anything for his verbose and overly-prepared answers has yet to be determined, but by the time you get to the end of the interview, you’ll be calling bullsh*t, too.

When the prestigious agency CAA announced it had signed Ostrovsky, Patton Oswalt, Maura Quint and other comedians responded immediately. The latter, a writer for Someecards, posted her take on Facebook and later shared it on Twitter:

Most of us here know @fatjew is shit, but your FB friends might not. Help them. I wrote this, use or write your own! pic.twitter.com/FFgPpiEtVC

Oswalt, meanwhile, set his sights on aggregation at large — a move that, while assumptive regarding what Ostrovsky does when compared to news aggregaters like moi, hits the mark:

My favorite Jane’s Addiction song is “Been Caught Aggregating.”

So what did the Fat Jew have to say about the accusations levied against him? Everything and nothing, it seems, because while Vulture‘s questions are often pointed and precise, Ostrovsky’s answers are anything but.

For starters, there’s his repeated insistence (talking points count: 4) that he’s not a comedian or an originator of content. Instead, he’s a “commentator”:

It’s important to note that Instagram — social media in general — is just a part of what I do. It’s not the focus. I’ve got White Girl Rosé, I’ve got a book coming out, I’ve got plus-size modeling, I’ve got all kinds of different stuff happening. Social media is one part of the business ecosystem. I’m a commentator.

I think of myself as a commentator, as an entertainer.

I’m a satirist. I’m a commentator. I’m a performance artist. I’m an idiot.

So he’s not actually creating anything, supposedly. Just commentating. That, or as he actually indicates early in the interview, his interns are — mainly because he’s so busy with everything else:

It’s important to note that Instagram — social media in general — is just a part of what I do. It’s not the focus. I’ve got White Girl Rosé, I’ve got a book coming out, I’ve got plus-size modeling, I’ve got all kinds of different stuff happening. Social media is one part of the business ecosystem…. My interns and I find pop-culture stuff that’s hyperrelevant and that’s going to resonate with people, and when it feels right, we put it up.

Yet perhaps the most telling thing about Ostrovsky’s worldview, or lack thereof, comes when Vulture asks him point blank about his Instagram account’s previously remarked method for lifting content from other sources without attribution. Hell, they even provide links:

One of the primary criticisms of your work is that you appear to take other people’s content and crop out their usernames. For example, Patrick Walsh’s “Crush Pussy Schedule,” or Ben Rosen’s photo. Have you or your interns ever cropped the names of sources out of photos?

I have never done that. Not once. I want people to get credit for stuff. You have to understand that the internet is like this giant Jacuzzi of insanity, and it’s just filled with so much stuff. I would never take someone’s name off something. That’s not who I am or what I’m about.