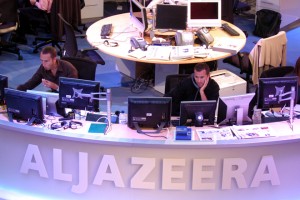 Time Warner Cable, in a rather blunt statement, said yesterday that the company would no longer carry Current TV, which was just sold to Al Jazeera. Saying the move was not political, the company cited Current’s low ratings as the reason. In an editorial, the New York Times called the move “unfortunate,” arguing that Time Warner “could block access to an important news source.”

“Our agreement with Current has been terminated and we will no longer be carrying the service,” the company said. “We are removing the service as quickly as possible.”

Though they did leave the door ajar for picking up the channel in the future: “We are keeping an open mind, and as the service develops, we will evaluate whether it makes sense, for our customers, to launch the network.”

“Many American policy makers and cable companies have had doubts about the impartiality of Al Jazeera, which is owned and financed by the emir of Qatar.” the NYT editorial says. “The emir, though he works closely with Washington on some issues, has interests and agendas that are sometimes at odds with United States interests.”

But even then, “Al Jazeera could bring an important international perspective to American audiences and should be given a chance to prove itself commercially before cable companies remove Current TV from their lineups.”

The Middle Eastern network provides something in addition to American outlets, they argued:

Al Jazeera often brings a nuance to international stories that can be lacking on American networks, because it has more foreign correspondents and overseas bureaus than many established Western networks. Its coverage of the Arab Spring won a George Foster Peabody Award and its English-language service is broadcast to more than 250 million homes in 130 countries, including Britain, South Africa and India.

In the end, they asked, why not let viewers decide? Why not, indeed.