NY Times Op-ed: Abortion Reversal Propaganda is All About ‘Narrative of Regret’ 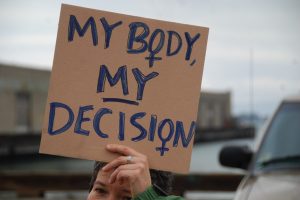 In recent years, as Food and Drug Administration regulations have loosened and research has indicated high success rates and safety from use of medication abortion, American women are using the abortion pill at higher rates. In response to this, abortion opponents are peddling out shocking lies about medication abortion, the biggest one being that it’s reversible.

States across the country are passing laws requiring doctors to lie to women that the results of medication abortion usage are reversible, and according to a feature in the New York Times Magazine on Tuesday, the harm in this is that abortion is further stigmatized, and women are told the lie that abortion and regret go hand-in-hand. The Times has called abortion reversal campaigns the “latest attempt by abortion foes to create a narrative of regret.”

On top of mischaracterizing abortion as physically unsafe, anti-abortion activists have also coined the idea of ‘‘post-abortion syndrome.” On top of the widely disproven lies that abortion can cause breast cancer or infertility, activists are also claiming that abortion causes this special kind of post-traumatic stress disorder.

Ironically enough, medical experts concluded in a recent study that contrary to this popular anti-abortion narrative, abortion has no negative impact on mental health, but struggles to access abortion certainly do. Nonetheless, lies about both the dangers of abortion and the health — physical and mental — risks that purportedly go with it are enough to either steer away women unsure about having the procedure, or convince those who may be part-way through using medication abortion to seek out reversal.

Yet, “for all of reversal’s anecdotal power, the science itself is still disputed,” the Times notes:

“While George Delgado [a San Diego-based “reversal” doctor] claims that flooding a woman’s body with progesterone saves the fetus, other doctors say that in many cases the fetus would have survived if the woman simply declined to take the second pill, misoprostol, after the initial dose of mifepristone. The American Congress of Obstetricians and Gynecologists issued a strongly worded statement against reversal in 2015 that said the fetus would survive 30 to 50 percent of the time.”

In either case, while the true efficacy of abortion reversal services remains questionable at best, the reason this movement has emerged is indisputable — that is, to shame and further pressure and confuse people who have had or are considering having abortions, to tell them they’ve committed or would be committing a deeply regrettable sin, rather than having a run-of-the-mill medical procedure.

The ultimate antidote to this? Letting women who have had abortions speak for themselves.

The most recent research reveals that 95 percent of women who have abortions don’t regret their decision. Contrary to popular conservative narratives, women who seek abortion don’t merely want the procedure the way children want candy. Many can’t afford to have children, fear for their health and safety, or simply don’t plan to have children, a decision women should be allowed to make for themselves without having to bend over backwards to justify it.

And as for women who do wind up regretting their abortions, everyone is different and everyone has different experiences. The last thing women need is to be pigeon-holed, and the last thing the few women who regret their abortions need is to be exploited and reduced to scare stories meant to dissuade others from doing what they want with their bodies.