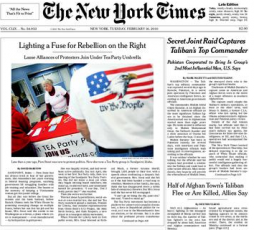 It’s very tempting to be sarcastic and say something along the lines of this is how serious journalism works. Except this is how serious journalism works. If you are a regular reader of the New York Times you probably opened your paper (let’s be serious, you clicked on the website or followed a Twitter alert) and read their big breaking story on how the Taliban’s top military commander “was captured several days ago in Karachi, Pakistan, in a secret joint operation by Pakistani and American intelligence forces.” (Alternately, you may have heard about it via Glenn Beck this morning.) Emphasis in the above quote is mine. Turns out the Times had the story a few days ago and held it at the behest of the White House. Times managing editor Bill Keller appeared on the WNYC/PRI show The Takeaway today, to explain how and why the Times held the story.

Well, actually, we called them [The White House], Mark Mazzetti and Dexter Filkins had the story pretty well nailed down last Thursday and they took it to the White House for comment, of course, as we routinely do, and the folks at the White House said, well hold on for a second we need to talk to you about this, and several of the people from our Washington bureau went over to the White House and sat down with people from the National Security Council and the press office and they said that they were pretty sure that Mullah Baladar’s colleagues in the Taliban were not yet aware that he was in custody. I don’t know the details of it, but they thought it had been a clean snatch and they were afraid once the word got out, other Taliban officials would go deeper underground or take measures to cover their tracks, so they asked us to hold off for a while.

Keller explains why they decided to hold this time around (can you ever really be sure the administration is not pulling your strings in their own best interests) and not others…interesting that he says this time was a no-brainer.

No, we get asked to withhold information, not often but from time to time sometimes it’s a no-brainer, you know we have reporters embedded in military operations — obviously they don’t file information that would put troops at risk. W’ve had other stories that were much more controversial where we decided that we would publish. This one was not, honestly, a very hard call. Obviously we were eager to break the story, it represented a lot of resourceful reporting by Mark and Dexter, but there was no obvious public interest reason to rush the story into print and you know we are responsible people; we didn’t want to compromise what sounded like a possible intelligence coup.

Keller also notes the paper’s relationship with this White House is less “acrimonious” than with the last one. The entire interview is interesting, and a good reminder how much power what we now refer to as ‘old-school’ journalism wields: “There are others [stories] where to this day we can’t talk about things we’ve held out because they would, for example endanger agents who are working in foreign countries.” Full interview here.