NYT Reports That MSNBC Personalities Treated Like Superstars At DNC

NYT Reports That MSNBC Personalities Treated Like Superstars At DNC 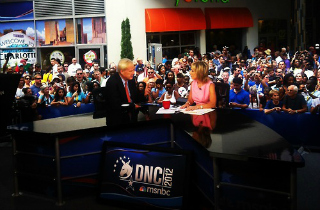 In an article titled “Welcome to the MSNBC, Er, Democratic Convention,” the New York Times reports that some of MSNBC’s on-air personalities are being welcomed like celebrities by the Democratic National Convention’s attendees.

“Sure, the events here in Charlotte are a national celebration of the Democratic Party and its presidential nominee,” the report continues, “but in many ways, it’s the MSNBC Convention.”

Reporters Ashley Parker and Michael Barbaro document how despite torrential rains, five-hundred convention-goers got soaking wet in order to watch a taping of MSNBC’s Hardball with Chris Matthews.

MSNBC’s branded swag — pins, coffee cups and tote bags — are “ubiquitous collectors’ items for delegates,” the reporters said. The paper also notes that the networks’ promotional posters and banners around and within the arena are so “ostentatious” that even MSNBC personality Willie Geist reportedly compared them to “North Korean propaganda.” The network’s designated convention plaza is regularly packed with large crowds taking in the TV studio, café, lounge, and interactive center.

The paper also quotes Morning Joe host Mika Brzezinski, who claimed she was accosted in a convention bathroom by a convention-goer who wanted her to pose for a picture. At a dinner with co-host Joe Scarborough, fans reportedly sent the hosts a bottle of expensive champagne.