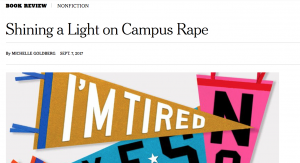 Earlier this month, education secretary Betsy DeVos gave a speech in which she announced her intent to roll back Obama-era Title IX guidelines meant to protect sexual assault survivors and hold universities accountable for investigating assaults. DeVos justified this with anecdotes and claims of false reporting, which is, by and large, an outlier.

Under DeVos, it appears the Education Department will be taking the “both sides” approach on the issue of campus sexual assault, equivocating two fundamentally unequal perspectives and experiences. The consequences to this are tragic — already low reporting rates may drop substantially, and equally concerning, by lumping together survivors with accused students, her speech seemed to suggest that campus sexual assault is an exaggerated issue.

DeVos and her department (which has previously suggested that “90 percent of [accusations] fall into the category of ‘we were both drunk,’ ‘we broke up, and six months later I found myself under a Title IX investigation because she just decided that our last sleeping together was not quite right'”) are not alone in this. A New York Times book review of journalist Vanessa Grigoriadis‘s book, Blurred Lines: Rethinking Sex, Power, and Consent on Campus, shows that reckless media practices are another source of misrepresenting campus sexual assault.

The review itself was published on Sept. 7, but a correction was issued on Sunday — one that seemed to throw out one of the review’s core arguments.

Its writer, Michelle Goldberg, took issue with a claim from the book — backed up by numerous studies — that women in college are more likely to face sexual assault than women who are not. Goldberg wrote:

“According to the Rape, Abuse and Incest National Network, women between 18 and 24 who are not in college are victimized at higher rates than those who are in college. Citing Department of Justice figures, the group says that college-aged women ‘are 20 percent less likely than nonstudents of the same age to be a victim of rape or sexual assault.’

“I’m not sure how anyone could write an entire book about the subject of campus rape and not reckon with this. Campus rape hasn’t become a major political issue because college students are more vulnerable than their peers, but because they are more powerful, able to demand an institutional response to their traumas.”

The correction issued Sept. 17 states “the review describes incorrectly Grigoriadis’s presentation of statistics from the Rape, Abuse and Incest National Network. She showed that there is disagreement over whether the data are sound; it is not the case that she gave the reader ‘no reason to believe’ the statistics are wrong.” Grigoriadis does discuss the RAINN study that Goldberg is referring to numerous times in her book, addressing the very concerns Goldberg lists in her review.

Specifically, Goldberg fails to note that the RAINN study she is referring to lumped together college students who are enrolled in community college and living at home with their parents, or only taking online classes, with students at residential colleges, who move from their homes to attend university.

None of this is to say that assault and sexual violence don’t happen everywhere, that assailants can’t be relatives or close friends or community members, that sexual assault is exclusive to college campuses. In many cases, assailants are people trusted by their victims, and the issue of sexual assault plagues young women and men regardless of their college enrollment statuses and living situations.

But to suggest that college campuses and the culture around sex and consent on these campuses do not have their own unique problems is simply inaccurate. Environmental and cultural factors, mixed with excessive alcohol, toxic notions of masculinity, and bureaucratic reporting processes that can wind up burying cases and delaying justice have made campus sexual assault an issue in itself, with a range of factors unique of sexual assault cases that don’t involve college students. All cases of sexual assault deserve visibility, but no one wins when we ignore serious, systemic issues specific to campus sexual assault.

In either case, one of the most troubling aspects of the Times review — beyond that Goldberg’s apparent unawareness of Grigoriadis’s references to the RAINN study raises a question of whether she read the book at all — is the suggestion that Grigoriadis’s focus on campus sexual assault is somehow a slight on survivors who aren’t enrolled in college, or that campus sexual assault is somehow an elitist issue. Her review suggests that survivors on college campuses are all sweepingly more privileged than those who are not — an idea that isn’t necessarily true and, ultimately, shifts the dialogue from the urgent issue of gender equality on college campuses, to one of purported elitism and privilege.

At a time when all survivors and advocates should be united against an administration seeking to undermine their rights and credibility, Goldberg’s assertions are counterproductive in their divisiveness.

Today, more than two-thirds of sexual assaults and acts of sexual violence go unreported. Statistically speaking, crimes involving sexual violence result in the least convictions of all other crimes. And despite DeVos’s concern that many reports of assault are false, this is the case less than 3 percent of the time. Any false conviction is a tragedy, but there is a bigger issue at stake — one of survivors who are too often intimidated into silence or abused by our legal system, an issue DeVos thinks is less important than defending accused rapists.

Rather than being placed on a pedestal due to college-age women’s “privilege,” campus sexual assault is, if anything, being sidelined by the mass attention it receives, because according to Grigoriadis, attention is going to the wrong aspect of it.

“The fundamental debate is what the definition is. It’s not about who’s telling the truth or not, that’s kind of the side show that gets a lot of attention,” she said in a phone call.  “I’m not saying there aren’t some bad cases, some innocent boys railroaded. You couldn’t be a journalist and look at some of these cases and think that all of them were fair. But far far more likely scenario is that she or he [the survivor] is telling the truth and the question is what is consent.”

She continued, “The question is not are you a manipulative bitch who pretended that something happened that didn’t happen. There’s really not a lot of difference of opinion on the actual acts that happened in the bedroom, just a question of if that’s sexual assault. If someone felt violated, maybe they were violated. At the same time, if you’re kicking someone out of school? It’s complicated.”

To Grigoriadis, DeVos’s speech makes it clear that the education secretary is “invested in maintaining this status quo.”

“She’s not interested in thinking about sexual assault from a broad definition, and what that means for gender equality,” Grigoriadis says. “She’s interested in what are the greatest possible cases, the cases where it’s unquestionably sexual assault.”

Campus sexual assault is a complicated issue, with its own set of unique problems. And right now, it looks like one of the biggest mistakes we’re making is ignoring its nuances.