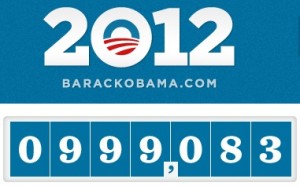 In a series of emails to supporters Monday, President Obama‘s reelection campaign touted the fact that its real-time donor ticker is nearing the one million mark, months ahead of when that milestone was reached in 2008. Since the President’s campaign is expected to raise over a billion dollars this election cycle, that large number of individual donors is more important than ever to burnish its image as a grassroots phenomenon, and the real-time donor counter is another innovative way to make people feel involved.

In one of several emails to supporters, Deputy Campaign Manager Julianna Smoot summed up the counter’s appeal:

I have this counter page pulled up on my laptop, and I can’t step away. Right now, we’re at 993,286 grassroots donors — and we’re going hit a million very soon if folks like you keep chipping in.

So if you haven’t given yet and still want to, now’s the time. Another supporter has promised to match dollar for dollar whatever you can give today.

OFA chief digital strategist Joe Rospars, in an appearance on Up With Chris Hayes a few weeks ago, explained how widgets like the donor counter hit pleasure centers in the brain similar to those that videogames do.

The counter is live at Obama For America’s website, and creeps up at about one new donor every 3-5 seconds. They haven’t said, but I think when it hits a million, Barack Obama pops onscreen, puts a pinkie to his lower lip, and says, “One million donors!”

Also unconfirmed is the fact that, if they manage to hit six million donors, he’ll fight Sasquatch.

The donor counter (only I call it the Doomsday Donor Clock, but if OFA likes that, they can consider it my contribution) is just one of a number of innovations that Obama For America has rolled out over the years to make donors feel a sense of involvement and ownership in the campaign. This season, they’ve unveiled a few programs with cosmetic crowd-sourcing features, such as an invitation for Texans to gripe about Rick Perry, and the evil twin of 2008’s Fight the Smears website “Attackwatch,” that had the added benefit of needlessly freaking out the President’s opponents.

The real purpose of these, and seemingly every other facet of the Obama campaign, is to make supporters feel intimately connected to the campaign, despite its less-than-intimate donor count and fundraising haul. The campaign’s chummy email subject lines even inspired a satirical Twitter hashtag a few weeks ago (some good-natured, some not), but if you believe there’s no such thing as bad publicity, it’s tough to think of a campaign that has generated this much buzz over something other than the amount of money raised (or not).