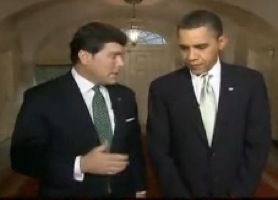 After serving over a year in office, Barack Obama effectively ignored Fox News, while appearing on nearly every other American television news outlet. That changed today when he sat down for an interview with Special Report host Bret Baier, and chatted about Health Care reform for roughly 17 minutes in a pre-taped segment. The sometimes combative tone of the interview stood in stark contrast to another taped package – the “walk and talk” segment between Baier and Obama – that was likely recorded in advance of the actual sit-down taping. While walking in the halls of the White House, Obama addressed foreign policy issues like Israel and Iran, and even gave a rather forgiving opinion on Tiger Woods.

The first segment was dedicated entirely to the looming vote on Health Care reform. In fact, some have claimed that the real reason behind Obama’s appearance was that he had yet to find all the votes necessary to pass. The walk and talk part was decidedly more relaxed, or perhaps less combative, than the formal interview.

When asked if the situation with Israel, Obama was quick to say no, perhaps in part to tamp down any brewing controversy, wisely giving the public appearance of being calm, cool and collected in a potentially inflammatory foreign policy theater. On the issue of Iran, he was asked if Iran were to acquire a nuclear bomb during the next three years, would his administration be considered a failure. He proudly touted that it was one of their highest priorities to keep that from happening. Finally, when asked of the Tiger Woods controversy, Obama seemed clear in striking a forgiving tone for Woods’ “failing his family.”