Obamacare Is Already Working: Three Things You Need To Know About The Future Of Health Care
Column

Obamacare Is Already Working: Three Things You Need To Know About The Future Of Health Care 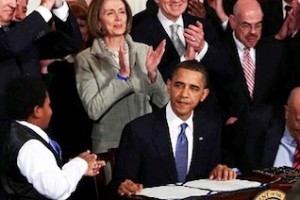 So is it a train wreck?

That was the dire warning of Max Baucus (D-Don’t Let The Door Hit You), when he lamented the challenge of implementing a bill as big and unwieldy as the Affordable Care Act.

But as the ACA nears its official 2014 implementation deadline, the emerging data suggest the bill is actually over-performing. (And with Republicans lowering expectations by pushing the #trainwreck line, “better than expected” is actually covering the spread.)

In assessing the ACA’s success or failure, it helps to remember the aims of the bill when it was passed in 2009, goals that were various and mutually reinforcing: to expand coverage, especially to those who couldn’t afford health insurance on the current market; to lower health care costs (aka “bending the cost curve”); to improve Americans’ health overall; and to shrink deficits by reducing the amount spent by both the federal government and individuals on health care. Obviously, these goals overlap: lower costs help reduce deficits; getting more people on insurance plans earlier keeps them healthier, which reduces costs down the line, and so forth.

With all that in mind, here are three areas where we have preliminary data:

The ACA requires states to set up insurance exchanges for people who don’t have employer-offered plans. One of the primary legitimate (a.k.a. sub-“Death Panel”) concerns was that the ACA’s regulations would scare insurers from the exchanges.

This isn’t happening. Here’s the New Republic’s Jonathan Cohn, who will be the Robert Caro of this bill by the time he’s done:

Cohn points out that initial participation in exchanges also forms a baseline that encourages others to join. He quotes Jon Kingsdale, who ran a similar exchange under Mitt Romney’s health care reform in Massachusetts and is helping with implementation on the national level. “If the Massachusetts experience is any guide,” Kingsdale said, “initially robust competition will actually spur even more entrants and competition in succeeding years.”

So insurers are participating in the exchanges, which helps toward the goal of insuring more people. The more insurers participating, the more competitively priced the offers. California provides a model for the reaction, and the numbers coming from Sunshine State surpass expectations. Via Ezra Klein:

[…] if California can make the law work, it shows that others can, too. And perhaps others will. We’re beginning to see competition drive down proposed rates in some exchanges around the country.

In Oregon, Klein points out, two insurers offering $400 monthly premiums refiled to offer cheaper rates after facing competition from a third company offering premiums at less than half that. “The Obama administration was ecstatic to see this,” Klein wrote. “It’s exactly what they’re hoping will happen across the country.”

In addition to lowering costs through additional competition, the ACA induces a heavier tax on so-called Cadillac plans, high-end insurance plans that encourage extra and more expensive health coverage. The excessive expenditures are considered one of the main drivers of health care costs.

Cadillac plans are usually offered through employers, who are now finding ways to reduce their offerings to avoid the tax. This is the most equivocal result of the early days of Obamacare, as the New York Times reported last week. The pros: companies are offering leaner packages that will decrease health care spending on the whole, leading to leaner and more affordable care, and to compensate, employers are paying more attention to health education and prevention among employees, another action that will decrease long-term costs.

The hospital where Abbey Bruce, a nursing assistant in Olympia, Wash., worked, for example, stopped offering the traditional plan that she and her husband, Casey, who has cystic fibrosis, had chosen.

Starting this year, they have a combined deductible of $2,300, compared with just $500 before. And while she was eligible for a $1,400 hospital contribution to a savings account linked to the plan, the couple is now responsible for $6,600 a year in medical expenses, in contrast to a $3,000 limit on medical bills and $2,000 limit on pharmacy costs last year. She has had to drop out of school and take on additional jobs to pay for her husband’s medicine.

In short, the Cadillac plan tax will cause lower health care costs overall in exchange for higher out-of-pocket spending. Whether that’s a fair trade-off will depend on your circumstances (or whichever PAC is bankrolling your ad). Still, families like the one profiled above will have a legitimate argument when they say that their insurance is not cheaper thanks to the ACA.

It should be noted that these are early and tentative numbers, and that there’s a certain amount of forecasting involved; the Affordable Care Act doesn’t officially roll out until January 1, 2014. But all of the above data indicate that the program will have an immediate, appreciable, and positive effect on the quality and accessibility of health care, as well as a substantive impact on health care spending over the next decade. Unless you’re running for the House of Representatives, that’s good news.