Obamacare Savior Jeff Zients Gives Interview to College Paper: ‘I Am Game to Help Out’

Obamacare Savior Jeff Zients Gives Interview to College Paper: ‘I Am Game to Help Out’ 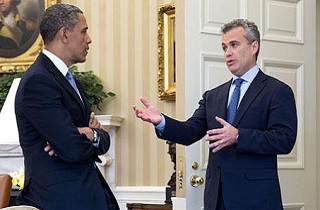 As Monday morning brings more cable news reports about a Healthcare.gov website crash, Jeffrey Zients, the man tapped to lead the “tech surge” to fix the beleaguered Obamacare website, is busy giving interviews to his college newspaper. If this use of Zients’ time during a crisis doesn’t instill confidence, then maybe an alpha-dog declaration that a website crash is like corned beef hash; I eat ’em both for breakfast!” will. Alas, you’ll have to settle for a slightly more blasé battle cry.

Even if you hate those superficial “optics” stories about leaders spending precious seconds doing normal stuff during a “crisis,” you’ve got to admit that publishing an interview with a college paper the morning after another website crash just isn’t a good look. The interview with The Duke Chronicle only touched briefly on Zients’ role in leading the Affordable Care Act’s web portal out of Fustercluckistan, but it was nice to hear him tackle this monumental challenge with all the urgency and enthusiasm of a Beer Pong tournament:

TC: Was this position in fixing the website something you hoped to have a hand in?

JZ: About three weeks ago the president announced that I would be be coming back into the White House to be his chief economic advisor, which is the director of the National Economic Council. So I’m very excited to be rejoining the president’s team and helping to coordinate economic policy. I am game to help out in any way that I can and Healthcare.gov and the ACA and the website are very important for providing people who don’t have health care today. So if I can contribute in any way to making sure that the Affordable Care Act is successful and people who don’t have insurance today can be insured, I’m happy to do so.

Cool, brah. Can you also help out getting this fetch ottoman I found at the curb up to my dorm? And also help make “fetch” happen?

When Zients declared, last week, that ““We’re confident by the end of November, HealthCare.gov will be smooth for a vast majority of users,” it sounded like the classic PR maneuver of setting an easily achievable goalpost, and maybe he’d knock the whole thing out by mid-November, and become co-Grand Marshall of a Healthcare.gov Thanksgiving Day Parade float with that nice smiling lady.  Now, she’s gone, and the William Wallace of Healthcare.gov is telling the troops “They may take our lives, but if you guys want freedom, I guess I’m game!”