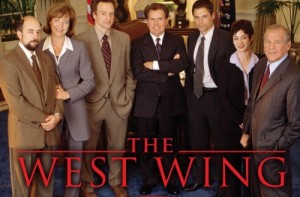 One of the more interesting moments in Tuesday’s State of the Union address was when Barack Obama announced a national effort to cure cancer to be headed by Vice President Joe Biden.

But fans of The West Wing noticed that Obama’s line was very similar to a line from the show, when fictional president and Notre Dame alum Jed Bartlet contemplates promising to cure cancer by the end of the decade in his State of the Union.

I think this was a West Wing.

Obama had his “Let Bartlett be Bartlett” moment with the curing cancer thing. #WestWing #SOTU

Curing Cancer announcement reminiscent of a SOTU episode of The West Wing. -mk

Even West Wing actor Rob Lowe pointed out the similarity.

Sam Seaborn finally got his cancer line into #TSOTU

For the record, here was the proposed speech from The West Wing [h/t Daily Caller]:

Over the past half-century, we’ve split the atom, we’ve spliced the gene, and we’ve roamed Tranquility Base. We’ve reached for the stars, and never have we been closer to having them in our grasp. New science, new technology is making the difference between life and death, and so we need a national commitment equal to this unparalleled moment of possibility. And so, I announce to you tonight, that I will bring the full resources of the federal government and the full reach of my office to this fundamental goal: we will cure cancer by the end of this decade.”

And here’s Obama’s remarks, in which he also alludes to the lunar landing and promises that America can cure cancer:

Sixty years ago, when the Russians beat us into space, we didn’t deny Sputnik was up there. We didn’t argue about the science, or shrink our research and development budget. We built a space program almost overnight. And 12 years later, we were walking on the moon…

Last year, Vice President Biden said that with a new moonshot, America can cure cancer. Last month, he worked with this Congress to give scientists at the National Institutes of Health the strongest resources that they’ve had in over a decade. So tonight, I’m announcing a new national effort to get it done. And because he’s gone to the mat for all of us on so many issues over the past 40 years, I’m putting Joe in charge of Mission Control. For the loved ones we’ve all lost, for the families that we can still save, let’s make America the country that cures cancer once and for all.

Fox & Friends even brought up the similarity the following morning (to Media Matters’ consternation). “If you’re going to rip off somebody, rip off Aaron Sorkin,” joked host Clayton Morris.

CNN got in on the act later in the day. Media reporter Dylan Byers was skeptical the reference was  intentional. “That said, there isn’t anyone in the political media universe of Washington D.C. who is not familiar with The West Wing and the writing of The West Wing. There is no way this speech went to print without the writers knowing the reference they were making,” he argued.