Of Course Rand Paul’s Filibuster Was A Publicity Stunt. That Was Kind Of The Point.

Of Course Rand Paul’s Filibuster Was A Publicity Stunt. That Was Kind Of The Point. 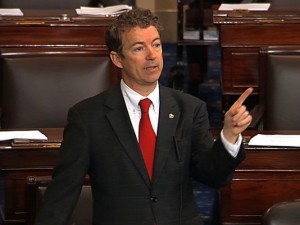 During and following Senator Rand Paul‘s historic 13-hour filibuster on Wednesday, amidst all the media coverage were catcalls from both the left and the right that it was just a stunt. Everywhere from MSNBC to the editorial page of The Wall Street Journal the Paulibuster pile-on has been relentless, ascribing the most negative motivations to the Kentucky senator. Yes, it was a stunt, but all politics is theater anyway, so why not make a show of it and use its powers for good instead of evil?

I’m always fascinated when people start trudging out the phrase “political stunt” as if it’s something we’re supposed to automatically hiss at. Well, what is politics if not a never-ending series of stunts? Every photo opportunity and every firebrand speech from within the halls of Congress is a stunt; the bigger question is: what is the outcome? Are you engaging in political theater for something worthless and/or partisan or are you actually trying to bring something important into the national conversation?

Because, really, we’re not talking about some silly nonsense here. It is frankly amazing that the big topic of political conversation this week was “please don’t kill us for no reason.” It’s only slightly reassuring that the Obama administration clarified this, mostly because it’s amazing this had to be clarified in the first place.

The media coverage of this has been puzzling, to say the least. Liberals and conservatives have both split in their reactions to Paul, and it’s interesting to see who has fallen on what lines, because this is one of those rare times when nothing falls on party lines.

First off, it should be noted, not everyone considered the filibuster big news. Bill O’Reilly completely ignored the big news on his Wednesday and Thursday night programs. In contrast, O’Reilly has been spending quite a bit of time talking about himself getting into a fight with Alan Colmes on Tuesday, because really, why bother engaging in a serious discussion about drones when you can keep hitting the same easy target.

Meanwhile, on Wednesday night, Lawrence O’Donnell saved news of the Paulibuster until the end of his show, partly because he really needed to diagnose O’Reilly’s anger management issues and come on, we have priorities, people, but mostly because he didn’t really think too highly of what Paul was doing. O’Donnell dismissed it as naught but a “fundraising stunt” over a point that he claimed was already put to bed by Holder.

The Wall Street Journal editorial page was a lot more brutal. Here’s a brief selection of it, just to give you some idea:

“If Mr. Paul wants to be taken seriously he needs to do more than pull political stunts that fire up impressionable libertarian kids in their college dorms. He needs to know what he’s talking about.”

And back on on MSNBC, Krystal Ball and Touré said the Paulibuster ended up making a serious issue look crazy and on the fringe. Yes, Paul rambled a bit, and I squirmed when I heard Paul invoked Hitler during the filibuster, but at least he has the guts to speak out in the first place. As John Nichols at The Nation put it, “there was a measure of grandstanding and over-the-top speechifying… But it is not necessary to agree with Paul to respect the fact that he was raising serious issues.”

I don’t know what Rand Paul’s motives were, nor do I care to speculate. But what he did ultimately resulted in everyone stopping what they were doing and paying attention to a sitting senator raising questions about a policy that, as the silence of most of Paul’s colleagues on both sides showed, has pretty broad bipartisan consensus. A lot has been made of how Democrats who vocally opposed expansion of executive power under George W. Bush are now complacent and willing to just go along with it under Obama. Glenn Greenwald, for one, has been speaking out about this “repulsive progressive hypocrisy” for years now.

The fact that Paul brought all this up in the context of filibustering a top-level Obama nominee is only significant because of the platform it allowed. If you’re a senator and want to raise questions about a certain policy, a public filibuster on the Senate floor (not one of those behind-closed-doors kind of filibusters) is a great way to get attention. Senator Dick Durbin spoke yesterday offering to let Paul speak at Congressional hearings into drone strikes, which is the kind of thing you say when you really want someone to stop talking. A hearing on the legality of drone strikes, quite frankly, just doesn’t have the same kind of oomph, as a lone Republican taking to the floor of the Senate and speaking for over half a day.

But what Durbin did was expected of Paul’s Democratic colleagues. Republicans piling on Paul? It’s not clear what that was supposed to accomplish. John McCain joined the chorus of voices calling Paul’s filibuster a “stunt.” This isn’t like when the GOP rebuked Ted Cruz for being a little too zealous in his questioning of Chuck Hagel. These are senior senators telling one of their junior allies in the most public way possible to fuck off.

And what McCain and Lindsay Graham did were also stunts. In fact, Graham’s stunt may have been the most galling of all. Alex Pareene at Salon drew attention today to how in spite of early indications that he would vote against John Brennan, Graham changed his mind. Why?

“I was going to vote against him until the filibuster, so he picked up one vote,” Graham said, laughing to reporters in the Capitol.

“I thought Brennan was arrogant, a bit shifty,” he said, but added that he was going to vote for Brennan because the vote had become a “referendum on the drone program.”

That is a shifty political stunt. If Graham is really saying that he changed his mind on an important nomination because he didn’t like his colleague having a temper tantrum, that says more about the pettiness of political stunts more than anything Rand Paul ever did. Paul’s stunt was about keeping the discussion about drone strikes in the national conversation. And for now, at least, he’s succeeded.