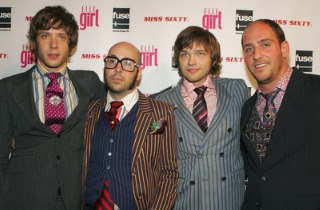 Whatever you think about their music, the group OK Go always manages to come up with wildly creative videos; their latest being a mind-trip of perspective for “The Writing’s on the Wall.” The idea of the video is to show how neatly things can line up when you look at them from the right perspective.

Meanwhile, Apple had its big announcement yesterday (unofficially titled the “Shut Up and Take Our Money” keynote), and to kick things off, the tech giant showed off a video cool video to show how neatly things can line up when you look at them from the right perspect… hey, wait a minute.

It’s hard to watch both videos and not think Apple wasn’t inspired by OK Go, at the very least (OK Go’s video was released three months ago). But to be fair, maybe Apple came up with the idea organically… except that OK Go is flat-out saying Apple ripped them off. Andy Gershon, the band’s managed, told Bloomberg Businessweek yesterday that OK Go actually spoke with Apple about working with them on the perspective video…:

He says the band met with Apple in April to pitch that visual concept as a potential video collaboration. Apple declined, so the band made its own video. Apple then hired 1stAveMachine, the production company behind OK Go’s video, to make a video for its iPhone launch event; it also used the same director. Apple did not immediately respond to requests for comment. “The videos speak for themselves and you can draw your own conclusions,” says Gershon.

You can compare both the OK Go video and the Apple video here: