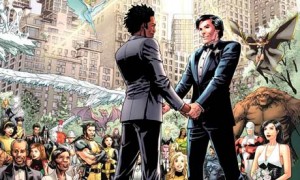 DC Comics and Marvel have not been shy about embracing social controversy in the past few years, and this week both of them decided to take a step forward with gay characters. DC Comics said that a previously-established character would return in the relaunch and publicly come out as gay. Meanwhile, Marvel Comics has featured an openly-gay character, the mutant hero Northstar, since 1992, and this week’s “Astonishing X-Men” issue features the character finally proposing to his boyfriend to reflect last year’s gay marriage legalization in New York. According to Marvel, the wedding will take place in an issue next month.

Does it feel gimmicky? Sure. The Marvel thing may be a coincidence (I’m assuming they actually work on these comics far in advance), but the DC announcement comes on the heels of President Obama‘s embrace of gay marriage and a national conversation about the social issue. But it’s also a sign of the times that comic books aren’t worried about any real backlash and are this willing to push the envelope.

Of course, where there are gay superheroes, there are people who don’t approve of these gay superheroes. One Million Moms, an organization in desperate need of a proper head count, isn’t happy about either announcement. They released a statement this week condemning both:

Children desire to be just like superheroes. Children mimic superhero actions and even dress up in costumes to resemble these characters as much as possible. Can you imagine little boys saying, “I want a boyfriend or husband like X-Men?”

This is ridiculous! Why do adult gay men need comic superheroes as role models? They don’t but do want to indoctrinate impressionable young minds by placing these gay characters on pedestals in a positive light. These companies are heavily influencing our youth by using children’s superheroes to desensitize and brainwash them in thinking that a gay lifestyle choice is normal and desirable. As Christians, we know that homosexuality is a sin (Romans 1:26-27).

Unfortunately, children are now being exposed to homosexuality at an early age. Comic books would be one of the last places a parent would expect their child to be confronted with homosexual topics that are too complicated for them to understand. Children do not know what straight, homosexual, or coming out of the closet even means, but DC Comics and Marvel are using superheroes to confuse them on this topic to raise questions and awareness of an alternative lifestyle choice. These companies are prompting a premature discussion on sexual orientation.

Now, the effectiveness of a possible protest may be stymied by the fact that there’s probably not going to be much overlap between middle-aged single comic book fans and an organization called One Million Moms. And they are also absolutely outraged that a character already beloved by children the world over is going to be reintroduced as a homosexual. Think of the scandal! People might start thinking gay people can be heroes too!

Speaking of which, DC is being tight-lipped about which superhero it will be. What do you think? Post your guess in the comments below.