O’Reilly: Trump Is Not to Blame for Violence, Should Still ‘Tone it Down a Bit’ 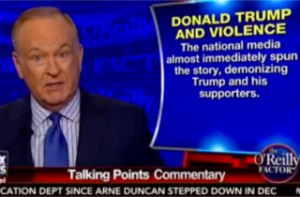 Bill O’Reilly‘s devoted his talking point segment Monday night to discussing Donald Trump and violence, in which the Fox pundit argued that liberal protesters, not the GOP frontrunner, were to blame for the recent eruptions at the mogul’s rallies. O’Reilly hastened to add, however, that Trump could stand to “tone it down a bit,” because he still had a general election to win.

In the media’s relentless coverage of the Trump rally in Chicago, which was disrupted and ultimately cancelled by protester activity, they had failed to report that the “far-left agitators who do not believe in freedom of speech” were to blame. The protesters, he said, “drove a situation that could have become violent,” and Trump was right to cancel the event.

O’Reilly blasted the media for blaming the violence solely on Trump’s incendiary rhetoric and the well-documented proclivities for racism and nativism among his supporters. In doing so, he argued, the press corps had neglected to note that “some supporters of Bernie Sanders are angry and undisciplined” also, or to disclose that “the Trump haters are so extreme.”

Trump, he said, was in “unfamiliar waters,” and would need to pivot his presentation if he was going to make as big an impact in the general election as he had in the primary. “He would be wise to tone it down a bit” and “to conduct himself with restraint.” Not because there was anything inherently wrong with his tactics so far, but because a “tone adjustment” would be necessary to win in November.