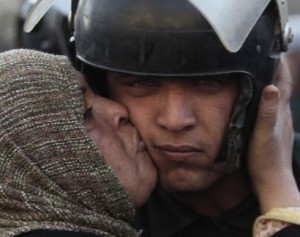 Roughly two weeks ago, the upheaval in Egypt was at a critical juncture; the protesters in Tahrir Square were growing in both size and passion, and it appeared that Hosni Mubarak‘s term as the president of Egypt hanging in the balance. According to an overlooked Independent report by Robert Fisk from last week, we now know that Egyptian soldiers were ordered by the President to turn on the demonstrators, but disobeyed orders, effectively neutering Mubarak’s power and sealing his future as a former dictator.

Writing for the Independent, Fisk reported:

Last night [Feb 10], a military officer guarding the tens of thousands celebrating in Cairo threw down his rifle and joined the demonstrators, yet another sign of the ordinary Egyptian soldier’s growing sympathy for the democracy demonstrators. We had witnessed many similar sentiments from the army over the past two weeks. But the critical moment came on the evening of 30 January when, it is now clear, Mubarak ordered the Egyptian Third Army to crush the demonstrators in Tahrir Square with their tanks after flying F-16 fighter bombers at low level over the protesters.

Many of the senior tank commanders could be seen tearing off their headsets – over which they had received the fatal orders – to use their mobile phones. They were, it now transpires, calling their own military families for advice. Fathers who had spent their lives serving the Egyptian army told their sons to disobey, that they must never kill their own people.

Worth noting that this report was published on the same day that Mubarak stepped down, effectively handing over control of the government to the very military who refused to fire on Egyptian citizens. This account also provides new contextual heft to the growing meme of Egyptian protesters kissing soldiers. (Photo Via)