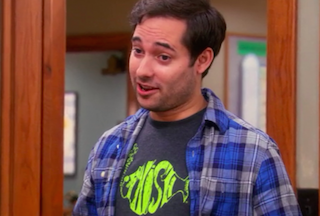 Harris Wittels, a comedian and writer on Parks and Recreation was found dead of an apparent drug overdose on Thursday night at his home in Los Angeles. He was 30 years old.

In addition to serving as a writer and producer on the NBC show, which has its series finale next Tuesday, Wittels was a frequent guest on the Comedy Bang Bang podcast and co-hosted the spin-off show Analyze Phish with Scott Aukerman.

Wittels’ biggest claim to fame may be the coining of the term “humblebrag” to describe the way people — often celebrities — complain about how amazing their lives are on Twitter. In 2012, he published the book, Humblebrag: The Art of False Modesty

In another podcast with Pete Holmes last November, Wittels opened up about his struggles of addiction and said he had checked himself into rehab for the second time this past year.

His fellow comedians have been paying tribute to him on Twitter:

Such heartbreaking news about Harris Wittels. A really funny guy.

Harris Wittels wrote my first episode of Eastbound and Down and was a hilarious and fun guy to hang out with. I'm very sad today

Don't know what to say. Harris Wittels was a fantastic writer I had the pleasure to work with at Parks and Rec. So so sad. RIP Harris.

Oh fuck no Harris Wittels is gone. God damn it.

So sad. Such a cool funny guy…only 30 “@ComedyCentral: RIP and thank you, Harris Wittels.”

I am truly crushed to report that a brilliant comic mind, Harris Wittels, has passed away. This really fucking sucks. #RIPHarris

Very sad to learn about the death of Harris Wittels. He was extremely talented and, more importantly, a really nice person.

RIP and thank you, Harris Wittels.