Path To Prosperity: Paul Ryan Is Having A Media Moment Over Bold Budget Proposal 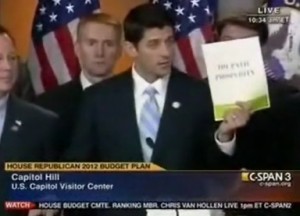 Regardless what one may think about the various political maneuvers and current debate on the federal budget (and the towering deficit we appear to be dangerously ignoring), there is little question that Rep. Paul Ryan is enjoying a media moment. GOP presidential hopeful Tim Pawlenty led a series of accolades from the right, and even some thought leaders have found time to praise a serious effort to “move the needle” in the national discourse over deficit reduction.

How did the political media landscape react to Ryan’s budget proposal “Path to Prosperity”? Well in some respects it was predictably mixed. But perhaps because Ryan is considered as a serious legislator who has deftly (refreshingly?) avoided throwing rhetorial firebombs, there has been as surprising lack of vitriol directed towards Ryan’s way from the left (and plenty of love from the right.)

One of the better parts of Ryan’s plan is his proposal to clean out and simplify the tax code. The Fiscal Commission does much the same thing, but it assumes the expiration of the Bush tax cuts for income over $250,000 and it increases revenue a bit beyond that, too, so where Ryan’s plan sneaks a big tax cut into his deficit-reduction proposal, the Fiscal Commission makes revenue a larger part of the solution.

Speaking today at the American Enterprise Institute, Paul Ryan laid out the broader case for his budget and spending reforms. He again contrasted his approach with the president’s — “Do nothing, duck, punt, kick the can” — and said, “Our budget is very, very different.” Ryan made an economic argument that the debt we are accumulating is unsustainable if major government programs aren’t reformed, and also a philosophical argument this his blueprint preserves what is “exceptional” about the American system.

Ryan tied his entitlement reforms to the successful, bipartisan welfare reform measures of the 1990s. “In Wisconsin, we paved the way on that,” he said, giving credit to former Gov. Tommy Thompson. He emphasized that it was a choice between gradually reforming the programs now and having to do “indiscriminate cutting” and European-style austerity later. Ryan said that his budget would “fulfill the mission of our health and retirement programs” and touted estimates that it would be a “jobs budget.”

Watch the Ryan’s press conference embedded below, courtesy of C-Span: