Paul Krugman Freaks Over Possibility That Obama May Compromise With GOP

Paul Krugman Freaks Over Possibility That Obama May Compromise With GOP 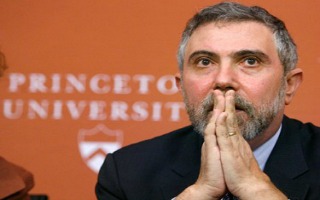 You can almost hear New York Times economist Paul Krugman’s heart sink into his stomach in his latest blog post, “I hope his isn’t true.” In this post, Krugman reels from the fact that President Barack Obama may just be contemplating a compromise with Congressional Republicans to avoid going over the fiscal cliff rather than seeking to go for his opposition’s throats. Wasn’t it just weeks ago that Democrats endlessly reminding us that it was Republicans in Washington who viewed “compromise” as a dirty word?

“[Washington Post blogger] Ezra Klein says that the shape of a fiscal cliff deal is clear: only a 37 percent rate on top incomes, and a rise in the Medicare eligibility age,” Krugman writes nervously. “I’m going to cross my fingers and hope that this is just a case of creeping Broderism, that it’s a VSP fantasy about how we’re going to resolve this in a bipartisan way. Because if Obama really does make this deal, there will be hell to pay.”

“Broderism,” for those of you unfamiliar with this term, is derived from late Washington Post writer David Broder’s name and refers to compromise for its own sake in order to appeal to the nation’s moderates who are appalled by conflict more than they are bad policy.

Krugman writes that there is no reason to change anything about programs like Medicare because raising the top tax rates breath new longevity into strained entitlements.

“So this looks crazy to me,” Krugman concludes. “All that effort to reelect Obama, and the first thing he does is give away two years of Medicare? How’s that going to play in future attempts to get out the vote?”

If Krugman’s lament is any indication of how those on the political left will react to a compromise, Republicans aren’t the only party that will be disappointed in their leadership when/if the fiscal cliff is resolved.

Read the full blog post via The New York Times