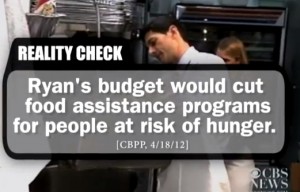 As Republican vice-presidential hopeful Paul Ryan continues to get the wrong kind of publicity for his photo-op at an Ohio soup kitchen over the weekend, progressive superPAC American Bridge is out with a new web video that puts a finer point on some of the criticisms which have attended it. The cynical artifice behind the campaign stop, which saw Ryan washing dishes that were already clean long after food service had ended, is compounded by Ryan’s record. As American Bridge’s video points out, Ryan’s budget would not only put more people into that soup kitchen, but also deprive that same food pantry of food.

It all began as a simple photo-op to show Ryan and family doing a good deed, but after pool reportersrevealed that Ryan’s Saturday visit to the St. Vincent De Paul Society Dining Hall consisted of washing dishes that were already clean, and after the hall had emptied, the president of the charity blasted the Ryan campaign for “ramrodd(ing) their way” into the soup kitchen, and added that ““The photo-op they did wasn’t even accurate. He did nothing. He just came in here to get his picture taken at the dining hall.”

In that way, MSNBC’s Martin Bashir (who is not alone in criticizing Ryan’s application of his faith) was being generous to Ryan when he quoted the Bible’s instruction to “Do not do your good deeds in front of people to be seen by them, Do not sound a trumpet before you go as the hypocrites do,” since, while Ryan was doing what he did to be seen, he skipped over the “good deed” part. Even Jesus didn’t foresee hypocrites with this much sac.

But that hypocrisy is even deeper than we’ve already noted. As American Bridge’s new video points out, the Ryan budget does slash aid to poor families, which would result in charities like the St. Vincent De Paul Society being overwhelmed, but Ryan’s budget could also result in deep cuts to a program that provides much of the food these pantries rely on:

The video relies on a report from the Center For Budget and Policy Priorities, and whatever you think of them, the dollar figure they’re using for Ryan’s cuts to food programs ($133.5 billion over ten years, over 17%) comes from Ryan’s own House Budget Committee staff. According to the report, Ohio, where Ryan visited Saturday, will be the seventh hardest-hit state by Ryan’s budget, which will mean extra customers for Ryan’s soup kitchen. At the same time, the Ryan budget also slashes $12 billion in “funds for commodities for The Emergency Food Assistance Program (TEFAP),” which provides food to food banks, up to half of their food or more, according to Roll Call‘s Norm Ornstein. Ryan’s photo op was like Marie Antoinette forcing a starving Parisian to pose with her for a Duncan Hines ad.

This photo-op has gotten a fair amount of publicity, and the Obama campaign is obviously aware of it, since they sent around a memo on it earlier today. If President Obama is given an opening at the debate tonight, it’s possible we’ll hear a lot more about it.

Update: Charity President Brian Antal has taken pity on Paul Ryan, and now claims he did wash dirty dishes, although he won’t say how he knows this. So, who are you going to believe, a reporter, a volunteer who was there, and your lying eyes, or a guy who wasn’t even there and is getting it from all sides?