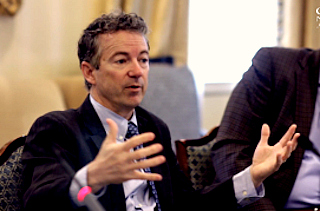 According to video taken by CBN News, Senator Rand Paul (R-KY) told a gathering of faith leaders last Thursday that America was in a “moral crisis,” in part over gay marriage, and that government had a role in addressing it.

“The First Amendment says keep government out of religion. It doesn’t say keep religion out of government,” Paul said (ahem). “We open the Senate every day with a prayer. You have prayer in government.”

“The moral crisis we have in our country — there is a role in trying to figure out things like marriage,” Paul said. “There’s also a moral crisis that allows people to think that there would be some sort of other marriage. So really there’s a role outside and inside government.”

The comments come as Indiana battles backlash over its so-called “religious freedom” bill, which critics say would allow business to discriminate against same sex couples.

The Washington Post wondered if this meant Paul had changed his position on gay marriage, following last week’s switch on defense spending — something Paul’s spokesperson denied:

In an interview with CNN in October, Paul said he believes in “old-fashioned marriage,” but he said that the government shouldn’t be involved and that the Republican Party can “have people on both sides of the issue.” When asked if he could rethink his opposition to same-sex marriage, Paul shrugged.

A spokesman for Paul said the senator’s position “has not changed” and “continues to believe that marriage is an issue that should be death with at the state level.”

“We need a revival in the country,” Paul added Thursday. “We need another Great Awakening with tent revivals of thousands of people saying reform or see what’s going to happen if we don’t reform.”

Watch the video below, via CBN NEWS/THE BRODY FILE: