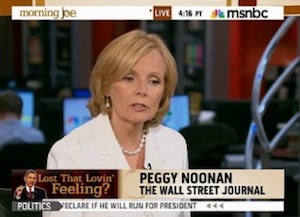 While there are people on both sides who might foresee the inside of a gym locker in the President’s future, Noonan’s current conclusions about the debt ceiling negotiations are based on complete nonsense. Noonan appeared on Morning Joe to defend her comments.

Ms. Noonan begins by talking about how the “Republican establishment reasserted itself this week,” but if her idea of winning behavior is Affleck-fueled fervor that collapses like a souffle´ in a noisy house of cards, then maybe the President should count his blessings that she considers him a “loser.”

Noonan’s overall premise is that “nobody loves Obama,” which may be true of the political media lunchtable that she sits at, but the President’s record number of small donors suggests otherwise. Noonan insulates her argument against facts by declaring that he’s an unloved loser no matter how many people support him, or how many times he wins. “He has supporters and bundlers and contributors, he has voters, he may win.”

Yes, there is disappointment among those supporters, but their bewilderment at the President’s obsession with compromise is nothing new. As manifested in the current debt ceiling debate, that willingness to bend himself into a pretzel isn’t aimed to please those who love him, or to placate those who hate him. It is designed to appeal to “independents,” those voters who don’t pay enough attention to know the difference between the two parties, but pay just enough attention to vote.

The President’s correct assessment of the debt ceiling crisis as a “hostage situation” is directly at odds with his apparent willingness to capitulate, but that’s not the substance of Noonan’s criticism. No, Exhibit “A” is an anonymous quote from a “hard-line progressive” who trots out the too-cool cliche´:

“I never loved Barack Obama. That said, among my crowd who did ‘love’ him, I can’t think of anyone who still does.” Why is Mr. Obama different from Messrs. Clinton and Bush? “Clinton radiated personality. As angry as folks got with him about Nafta or Monica, there was always a sense of genuine, generous caring.” With Bush, “if folks were upset with him, he still had this goofy kind of personality that folks could relate to. You might think he was totally misguided but he seemed genuinely so. . . . Maybe the most important word that described Clinton and Bush but not Obama is ‘genuine.'” He “doesn’t exude any feeling that what he says and does is genuine.”

That “hard-line progressive” probably requested anonymity out of embarrassment. At least George W. Bush was genuinely misguided? This is the kind of idiocy that’s ruining this country, the fact that any political commentator could advance such a premise with a straight face. Such an observation should be made only as an indictment of the morons in our electorate who vote based on beer-companion criteria, not as a criticism of President Obama.

Noonan’s offhand criticism of Jay Carney (“who stands there looking like a ferret with flop sweat”) is not only juvenile and nonsensical (why is a ferret playing Texas Hold ‘Em? Everyone knows their game is blackjack), it’s completely at odds with reality. As a colleague and a reporter, I was disappointed in Carney’s attack on Ed Henry, but overall, this debt crisis has made Jay Carney come alive like Peter Frampton on a defibrillator. After months of calculatingly bland White House briefings, Carney’s pushback against Republican efforts to hand the grenade to President Obama has made the Brady Briefing Room interesting again.

That’s really what is at the heart of Noonan’s criticism, a desire to hang a Republican disaster around a Democratic president’s neck. Raising the debt ceiling is Congress’ job, but Noonan, et al, want President Obama to not only provide them with a cigarette and a match, but to smoke it for them, too.

Noonan says, in her conclusion, that President Obama is losing because “he is not a devil, an alien, a socialist. He is a loser.”

As far as the debt ceiling goes, that remains to be seen. I happen to agree with Lawrence O’Donnell that the result will be what President Obama has wanted all along: a clean increase to the debt ceiling. With the August 2 deadline looming, and no passage of a compromise in sight, Republicans will have little choice come Monday. If President Obama doesn’t blink, and insists on a debt ceiling increase through 2012, this will be an unmitigated victory for him. All of the compromises he’s offered to this point will be forgotten like the patter of a hostage negotiator when the SWAT team finally takes the shot.

This must be a new trend for conservatives, calling the Sarah Palin movie “The Undefeated,” calling President Obama a “loser.” Passing health care reform, ending DADT, killing Osama bin Laden and the Birther meme with the same bullet, and the 2010 lame duck compromise are just part of the President’s “win” column. The President’s first term has been disappointing in many ways, but (and this seems really obvious) conservatives like Noonan should wait to call him a “loser” until he actually loses something.

Update: Noonan appeared on MSNBC’s Morning Joe to defend her comments, and Mika Brzezinski pointed out that it doesn’t seem to matter, to mercurial critics, what the President does. Noonan jumps on the “invisible man” bandwagon, even though, just six days ago, she was asking the President to “get out of the way” so Congress could go ahead and pass that “Gang of Six” proposal.