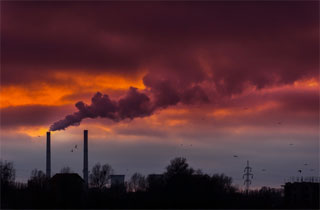 A newly-published Pentagon report reveals that the government is preparing for an unintended consequence of climate change: increased terrorism threats.

The report, issued Monday, lays out the factors leading to increased terrorism: first, the military would be strained from the additional work of responding to national disasters (flooding, droughts, violent storms) in the US, in addition to facing climate change threats, such as flooding, on their own bases.

“These developments could undermine already-fragile governments that are unable to respond effectively or challenge currently-stable governments, as well as increasing competition and tension between countries vying for limited resources,” they continued. “These gaps in governance can create an avenue for extremist ideologies and conditions that foster terrorism.”

To prepare for such conditions, the Pentagon has begun integrating climate change scenarios into its war games, as well as preparing their bases for rising sea levels and developing new strategies to maintain their supply line.

According to Marcus D. King, an expert on climate change and international affairs at George Washington University, climate change has already led to terrorism, and is directly responsible for the rise of ISIS, which has consolidated its power by seizing control of key water sources in the Middle East.

“Climate change and water shortages may have triggered the drought that caused farmers to relocate to Syrian cities and triggered situations where youth were more susceptible to joining extremist groups,” he told the New York Times.