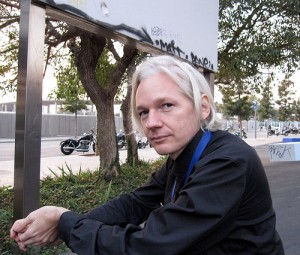 A few days ago, federal officials arrested the 22 year old Army intelligence analyst who allegedly leaked the infamous Collateral Murder video to the website WikiLeaks. Philip Shenon of the The Daily Beast is now reporting, though, that the government is “desperately” seeking WikiLeaks founder Julian Assange to persuade him not to publish 260,000 classified cables that the analyst, SPC Bradley Manning, also leaked. The Pentagon apparently fears that the cables, if released, could greatly damage national security.

The cables, Shenon writes, contain “information related to American diplomatic and intelligence efforts in the war zones in Afghanistan and Iraq.” While the headline making video that was released in March certainly created a public relations disaster for the US military, there seems to be much graver repercussions possible if these cables are leaked. The Pentagon, at least, is acting like there is by starting a manhunt for Assange, and Manning, before he was arrested, mused about the potential fallout in online conversations with a computer hacker (who was the one to eventually turn him in) that were recovered and published by Wired.

“’Hillary Clinton, and several thousand diplomats around the world are going to have a heart attack when they wake up one morning, and find an entire repository of classified foreign policy is available, in searchable format, to the public,’ Manning wrote.”

WikiLeaks has responded to the manhunt with scorn, tweeting this message: “Any signs of unacceptable behavior by the Pentagon or its agents towards this press will be viewed dimly.” More recently, they’ve tweeted about a public appearance that Assange will be making tonight. However, in Shenon’s article, the writer makes note that the WikiLeaks founder has appeared at recent public appearances only via Skype. Knowing that investigators are looking for him, Assange probably won’t do anything different tonight. Not that it would necessarily make any difference if the Pentagon caught him.

From The Daily Beast:

The officials acknowledge that even if they found the website founder, Julian Assange, it is not clear what they could do to block publication of the cables on Wikileaks, which is nominally based on a server in Sweden and bills itself as a champion of whistleblowers.

As only the military, Manning, and Assange know what the cables truly contain (or if they really exist in the amount and context that Manning and WikiLeaks are implying), the rest of us will just need to wait and see if they eventually hit the web. Then the world will be looking to see what happens next.