People in Glass Blogs Shouldn’t Throw Salons at Each Other 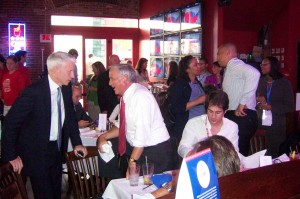 The Washington Post salon scandal, first reported by Politico, has kicked off a response in the media chattering classes that just won’t die. Everyone wants to have their say! Today’s installment comes from Ken Silverstein of Harper’s who points a finger right back at Politico, accusing the online powerhouse of being guilty of its own shady canoodling with politicians and the people with deep pockets who fund them!

“Politico itself is hardly virginal when it comes to the wall between reporting and chasing revenue,” says Silverstein, drawing attention to a party that Politico threw in Denver last year at the Democratic convention — a party which was co-sponsored by Glover Park Group at DC lobby and consulting firm. (Full disclosure: I was at that party,and so was my now-boss Dan Abrams, who got a mention in Politico’s “rapturous coverage”). After reading that coverage Silverstein had this to say:

This intermingling of celebrities, journalists, and politicians, courtesy of big lobbying money, suggests a cabal of insiders who don’t really care who pays for their partying.

BREAKING: Reporters mingle with politicians and the people who pay the bills! This can’t really be big news, can it? The reason that the WaPo salon scandal caused such a fuss is because the paper was advertising access to its reporters, and putting a dollar figure on how much that access was worth, and suggesting perhaps that the editorial room could be bought. If events which provided free food to the media — and in my short experience they almost always do — were outlawed one suspects very few people would manage to make the contacts that sometimes lead to the important stories. Why does everyone have such a low opinion of journalists’ ability to perform ethically? 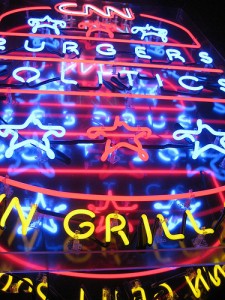 Here’s the other thing about drawing attention to that particular Convention party: it was one of many. And by many we mean a lot. The Democratic Convention (actually the GOP, too) was comprised of some convention floor speeches and a whole lot of social events — thrown by media outlets — in which celebrities, journalists, and politicians all mingled, ate, drank, partied, and got aroma-therapeutic arm massages together. This non-exhaustive list includes the HuffPo Oasis, which offered free spa treatments and snacks; the CNN Grill, which offered free everything; a big Slate party, where all sorts ofmachers mixed; and the big-ticket Vanity Fair/Google party. Those were just the big ones. Politico’s shindig was only unusual in the sense that they held it in two locations four blocks apart so all of the attendees spent their time being paranoid that the better party was happening at the other locale. I would bet that very few people at any of these parties — and by my count at least half were in the media — had any idea who was footing the bill. And yet, it’s probably safe to say some good, solid reporting — and contacts — came out of that week.

Silverstein further notes that Politico is often times required to report on clients of the lobbyists it has co-sponsored parties with:

I’ve been told of numerous instances where Politico editors aggressively courted advertisers and also that it reports on defense and Wall Street extensively in hopes of winning advertising dollars from those sectors (obviously not only for that reason). Might that have some impact on Politico’s reporting?

Lord forbid anyone report on Wall St. and defense extensively. Alas, Silverstein doesn’t actually come up with any instances where this “extensive” reporting has been unduly favorable.

No one’s arguing that the media shouldn’t play watchdog on itself — we questioned Politico ourselves the other week — but the sense of outrage over the fact the reporters are frequently in situations where they mingle with the people who may or may not pay the bills, or their bills, is naive. One often gets the sense that certain sectors of the media criticism gallery feel that reporters should live out there professional lives in some sort of media monastery far from the temptations of the evil, compromising, moneyed, powerful masses. Lord knows we wouldn’t want to be able to report on how that half lives!