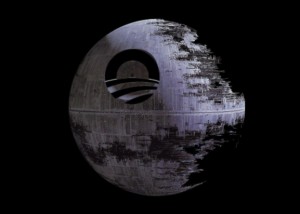 The idiotic push to deport CNN’s Piers Morgan for exercising free speech has focused renewed attention on the White House’s “We the People” petition initiative, with some recommending that the program be scrapped, and others (like Mediaite‘s Josh Feldman) predicting its demise. While there are many stupid petitions garnering many stupid signatures, the dumbest has to be a petition to demand that President Obama impeach himself, which has been signed by over 45,000 dummies, or the one demanding federal funding for a Death Star, which has garnered over 32,000 signatures. Despite this foolishness, the program is not only worth saving, it is of indispensable value to the eponymous “We the people.”

The complaints about the system are valid, from my own consternation at the way it amplifies our ugliest voices to the rest of the world, to Josh’s criticism of the White House’s elastic rules for responding, to The Daily Beast’s Megan McArdle‘s concern about the time wasted, and the multiplier effect of publicized idiocy. Case in point, the 45,000-plus geniuses who signed this petition:

1. He proclaimed war in libya without getting congress approval first. Article I, Section 8- Only congress can approve to start war.

2. Obamacare is unconstitutional. Forcing US citizens to get health insurance whether they want it or not.

3. Obama disrespects our Constitution calling it flawed and trying to change it even after taking this oath:

“I do solemnly swear (or affirm) that I will faithfully execute the Office of President of the United States,

and will to the best of my Ability, preserve, protect and defend the Constitution of the United States.”

Forget, for a moment, the sheer inaccuracy and falseness of their “grounds” for impeachment (the fist three are objectively false, and the fourth would require the impeachment of every president since FDR), or the fact that they couldn’t even be bothered to Google an accurate description of congress’ war powers, or the fact that the Obama administration can’t impeach President Obama. This is obviously nothing more than a dopey attempt to get attention, by people who just want to subvert the intent of the program, and yet another embarrassing amplification of the most ignorant American voices.

McArdle is correct that petitions like this, or the one requesting funding for a Death Star, or the one demanding the arrest of Meet The Press host David Gregory, are a waste of time, but not that much time. I’ve watched White House press secretaries Robert Gibbs and Jay Carney deal with questions like these, and worse, for four years, and they haven’t crippled the government. Megan is also spot-on with her assessment that the petitions are “far to(o) vulnerable to just this form of idiocy, and the success and fame of this petition is only going to encourage more of it.”

However, the 25,000 signature hurdle, low enough to be attainable, will filter out many of the time-wasters, and the publicity attending the attention-getting ones does carry with it the side benefit of increasing awareness of the program, for those who wish to use it properly. The Death Star petition will probably provide more publicity for the program than the Obama administration could ever buy, as will their inevitable response, which will hopefully take into consideration our diplomatic relationship to Alderaan. Star Wars fans get an immature giggle, the media gets some easy copy, and millions more people become aware that they can petition the government. That’s a win all around.

Josh Feldman points out that the White House has left themselves lots of wiggle room as to how, when, or if they respond to petitions, and that the responses themselves are not substantive:

(H)ere’s the rub, and it’s a little provision contained in the site’s Terms of Participation:

The White House may elect to respond to petitions at any time, including those that have not crossed the first or second threshold.

Translated, that basically means the White House will respond to your petition if it gets over 25,000 signatures in 30 days, except that they might take months to respond to a particular petition, if that, and also they might respond to petitions that haven’t crossed the threshold if they deem it important enough.

There is little likelihood that a White House petition will ever result in a truly newsworthy response, especially, as Josh also notes, given the amount of time they can take to polish all of the news out of them. However, that doesn’t mean the petitions are without value, or that they won’t have an influence on policy.

The real value of these petitions lies on the edge of the blade opposite their flaws. Yes, the media pay outsize attention to silliness like the Death Star petition, but also to the more than 500,000 people who signed petitions on gun control. That number had to also grab the attention of the administration, and the result might be a better starting point in the negotiations on gun policy, an influence that will be nearly impossible to gauge precisely, but also impossible to ignore. The steady stream of petitions on marijuana policy and marijuana pardon could, similarly, lead the administration to take the issue more seriously than it has so far.

More than that, though, the petition process gives relatively small numbers of Americans the opportunity to put issues that are important to them on the White House’s radar, and possibly the media’s. That’s powerful, and not something that media elites should throw away lightly. Deciding what is important, and what isn’t, is mainly the job of political journalists, who are supposed to exercise good judgment in representing the public interest. Often, that isn’t the case, and while public referendi are no replacement for good journalism, they can become a valuable supplement to it. Yes, those 33,000 people who think the Death Star is important are wrong, but so were the reporters who thought the fiscal cliff was more important than the President’s plan to reduce gun violence. Used properly, these petitions can lend a voice to issues that might otherwise be ignored.

This process is still relatively new, so it will take some time for everyone to figure out the best ways to use it, but the potential for good, and the merits of the very American principles upon which it was built, far outweigh the flaws that have come into relief thus far. Let’s leave the baby and the bathwater where they are, for now.