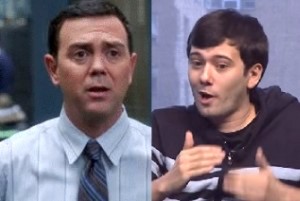 You might recall Turing Pharmaceutical CEO and Boyle from Brooklyn 99 stunt-double Martin Shkreli from his 5500% increase in the price of a life-saving toxoplasmosis treatment, or his subsequent lowering of the price in response to the furious backlash he received, or his aggressively douchy Twitter feed. For the uninitiated, here’s a bit of Shkreli’s more recent work, a little jam he dropped earlier this month called “I should’ve raised prices even more!”:

Apparently, Shkreli isn’t satisfied with Kobe or Wagyu, and is looking to buy himself an even more expensive variety of beef, the kind you settle in the streets. Last month, Shkreli bought the only copy of Wu-Tang Clan’s one-of-a-kind album Once Upon a Time in Shaolin for what he now confirms as a $2 million price tag. News of the sale was accompanied by this statement from The RZA:

“The sale of Once Upon a Time in Shaolin was agreed upon in May, well before Martin Skhreli’s [sic] business practices came to light. We decided to give a significant portion of the proceeds to charity.”

Now, in an interview that I would swear was fake if it hadn’t been tweeted out by Shkreli’s verified Twitter account, the former Most Hated Man in America is talking more shit than an anthropomorphic colonoscopy probe, telling RZA “If I hand you $2 million, fucking show me some respect. At least have the decency to say nothing or ‘no comment.’”

He doesn’t stop there, though, repeatedly threatening some next-level shit elsewhere in the interview. Here’s a little sample:

I bought the album. [There’s a ] big fucking check in RZA and Cilvaringz’ pocket now, but if they’re starting to turn up on me… The Albanian community is a very weird community. We’re some of the most tight-knit kind-of kill for each other, die for each other motherfuckers there are. People say it’s one of the craziest ethnicities there is in terms of their loyalty and bloodlines and shit like that. This thing [Wu-Tang thing] is starting to get pretty tense.

Looks like it’s time to reserve me a copy of Straight Outta Elbasan, because it’s about to jump off up in here.

In case Wu missed Shkreli’s meaning, he puts a finer point on it later in the interview:

You’ve got to research Albanians, it’s the most hot tempered culture there is. I have a crazy temper myself. He’s from the streets. The guy hasn’t been in the hustle in 20 years. He doesn’t want to get me angry and I’m getting angry. Again, what Ghostface said to Bronson was 100 hundred times worse than me and RZA. This is starting to get into some weird Albanian shit. There are similarities, very similar. I’m just getting fed up. If he doesn’t think I have the resources to do something, he fucking doesn’t know me. If Ghostface can make people disappear, what the fuck do you think I can do?

Time to tool up, fellas, because word is Turing Pharmaceuticals has already begun clinical trials on Protekyanech™, a drug that will render Shkreli immune to attack from the hip-hop collective. (Side effects may include temporary defness, swelling of pockets, and disbelief of the hype. Before taking Protekyanech™, ask your doctor if you are wack.)

The rest of the interview is replete with similar gems, all of which seem aimed at satisfying a craving that money can’t slake. A one-of-a-kind Wu-Tang record is $2 million bucks, but being featured on a string of dis records? That’s priceless. Here’s hoping Wu-Tang Clan denies him that prize.

Update: Well, that didn’t take long. Looks like it’s Shkreli who will be disappearing for awhile, as he was arrested Thursday morning for securities fraud:

A boyish drug company entrepreneur, who rocketed to infamy by jacking up the price of a life-saving pill from $13.50 to $750, was arrested at his Manhattan home early Thursday morning on securities fraud related to a firm he founded.

Martin Shkreli, 32, ignited a firestorm over drug prices in September and became a symbol of defiant greed. The federal case against him has nothing to do with pharmaceutical costs, however. Prosecutors charged him with illegally taking stock from Retrophin Inc., a biotechnology firm he started in 2011, and using it pay off debts from unrelated business dealings. He was later ousted from the company, where he’d been chief executive officer, and sued by its board.

In the case that closely tracks that suit, federal prosecutors accused Shkreli of engaging in a complicated shell game after his defunct hedge fund, MSMB Capital Management, lost millions. He is alleged to have made secret payoffs and set up sham consulting arrangements. A New York lawyer, Evan Greebel, was also arrested early Thursday. He’s accused of conspiring with Shkreli in part of the scheme.

Coincidence? Or further proof that Wu-Tang Clan ain’t nothing to f*ck with?