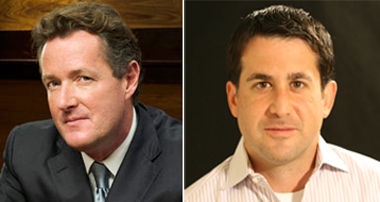 In the latest promo for Piers Morgan Tonight, Morgan tells viewers they can call him anything except “boring.” You can add the term “ass” to that list. That’s what NY1’s John Schiumo called him last night after he tweeted that New Yorkers should “calm down” about all the snow considering it’s being cleaned at a much better than usually happens in England. This set off a rather lengthy Twitter fight which included name calling, follower-count sniping, and Shakespearean quotations. Morgan’s right about one thing. After reading his Twitter feed, I sure won’t be calling him “boring” any time soon.

MORGAN: Msg to New Yorkers hammering mayor Bloomberg – if we had 20in blizzard in London, nothing would move for a month. Calm down.

MORGAN: What the attacks on Bloomberg tell me is that Americans expect a higher level of service than we Brits, and usually get one. I admire that.

MORGAN: Not defending Bloomberg – just pointing out that way NYC has recovered from 20in blizzard would be deemed miraculous in UK, not disastrous.

MORGAN: @Schiumo Sorry Mr Schiumo, but a) I’ve never heard of you and b) I don’t view local news anchors with just 700 followers as rivals.

SCHIUMO: @piersmorgan You judge people based on followers? And CNN trusts you? Your ego will be your demise. And I only heard of you last month.

MORGAN: @Schiumo ‘Oi beware, my lord, of jealousy; it is the green-eyed monster which doth mock the meat it feeds on.’ Shakespeare.

SCHIUMO: People! Stop following me or @piersmorgan and other pompous “journalists” might think I have credibility.

MORGAN: @Schiumo ‘Oi beware, my lord, of jealousy; it is the green-eyed monster which doth mock the meat it feeds on.’ Shakespeare.

SCHIUMO: Oh, @piersmorgan. It took your producers 45 minutes to look up a quote to make you look even more arrogant and foolish?

MORGAN: @Schiumo Are you the least followed news anchor on Twitter in America?

SCHIUMO: @piersmorgan Your obsession with followers is telling. And scary. Speaks volumes on the state of national “news” networks.

MORGAN: @Schiumo You’re like Stephen Baldwin and Vinny Pastore – they thought they were big shots in NY too until I wiped them in Celeb Apprentice.

SCHIUMO: @piersmorgan Bye Piers. And that sound you hear is New York laughing at you.

MORGAN: @Schiumo Which is one thing it’s never done to you Schumy old son.

Neither side came off looking particularly well. Schiumo’s initial tweet was clearly a way to drum up attention from a much bigger rival while Morgan feeling the need to point out that a local news anchor has less Twitter followers than Larry King’s replacement just came off as petty.

By this morning, Morgan seemed to have learned his lesson thanks to the slightly unflattering Gawker headline “CNN’s Piers Morgan Will Fight Almost Anyone on Twitter”. Linking to that post, the host had this to say: