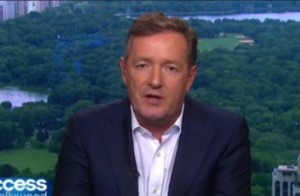 When the world is mourning the death of a towering, legendary black figure in American history, in world history, what’s the appropriate way for a prominent media voice to respond? If you’re British click-whore Piers Morgan, you compare Muhammad Ali to Donald Trump. Unfavorably. On the subject of racism. In a grotesque attempt to pimp his grave-robbing column on Ali, Morgan posted a series of tweets asserting that Muhammad Ali was worse than the presumptive Republican presidential nominee when it comes to “racist” statements:

The rest of Twitter was quick to offer Morgan a tall glass of all-American Shut Up juice:

This comment after Muhammad's death shows the the cowardice of @PiersMorgan! https://t.co/Xv1jTDWu6j

It's almost amazing that he's figured out how to flawlessly make a jackass of himself in 140 characters or less.

Being of such mediocre talent and intellect, he is demonstrable proof of the privilege he denies.

oh boy. what did Piers Morgan say about black people this time.

Piers Morgan is a professional troll and a racist hack.
He never trends on Twitter unless it's off the backs of Black people.

The ever-classy Morgan has now resorted to using the late Muhammad Ali as a human shield against his critics:

Be sure to check out Morgan’s column on the life and death of Muhammad Ali never.