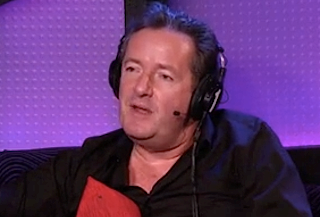 It all happened at a Knicks game that the two men attended a couple of years back. Morgan spotted O’Reilly in the crowd and decided to take a wild shot and ask the Fox host to appear as a guest on his new CNN show. Morgan described how O’Reilly barely registered his presence as he attempted to introduce himself, refusing to engage in conversation even about Rupert Murdoch, who they once shared as a boss. Morgan’s reaction after O’Reilly “rudely” blew off his invitation? “What a dick.”

About 10 minutes later, as Morgan was sitting in his seat “seething,” O’Reilly walked over with his young daughter and her friend. It turned out the girls were big fans of Morgan’s old show America’s Got Talent (on which he was later replaced by Stern) and wanted to get a photo with him. “You’ve got to fucking be kidding me,” Stern said to Morgan. The kicker came when Morgan asked O’Reilly to take the picture and a Madison Square Garden staffer tried to stop him from invading Morgan’s privacy.

Asked by Stern if he thought O’Reilly didn’t like him just because he worked for CNN, Morgan repeated his assessment: “No, I think he is a dick.”

Watch video below, via Howard TV: