Plan B, Or Not Plan B: Boehner Pulls Out

Plan B, Or Not Plan B: Boehner Pulls Out 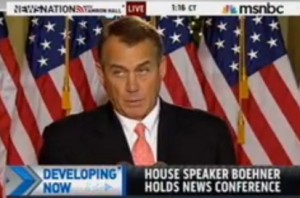 What a difference a day makes, as the song says. On Wednesday, Republican House Speaker John Boehner (R-OH) responded to President Obama‘s latest, far-too-generous offer on a fiscal cliff deal with the political equivalent of dropping the mic in a rap battle, delivering a 30-second press conference at which he promised to crush President Obama’s whole crew with his mad “Plan B” beatz.

Late Thursday evening, however, Boehner had to pick that mic back up, and try to think of a funky-fresh rhyme for “Never mind!”

Boehner’s “Plan B” bill would have made the Bush tax cuts permanent for all income below $1 million per year, which was a response to President Obama’s offer of a $400,000 threshold, along with spending cuts and a change in Social Security indexing (also a cut). At his ultra-brief press conference Wednesday afternoon, Boehner was all like “Straight outta Congress, crazy motherf**ker named Boehner, droppin’ Plan b on you like a Greg Louganis half-gainer…”

“Tomorrow, the House will pass legislation to make permanent tax relief for nearly every American,” Boehner said. “99.81% of the American people. Then the President will have a decision to make. He can call on senate Democrats to pass the bill, or he can be responsible for the largest tax increase in American history.”

This was Speaker Boehner on Thursday night:

“The House did not take up the tax measure today because it did not have sufficient support from our members to pass. Now it is up to the president to work with Senator Reid on legislation to avert the fiscal cliff…”

When it became apparent that Speaker Boehner just didn’t have the votes to pass Plan B, the House just packed up and went home for the holidays.

Boehner’s huge bluff would have failed even if it had succeeded, since polls show that if no deal is reached on the fiscal cliff, most Americans will blame Republicans, and most Americans support President Obama’s plan to extend the Bush tax cuts on incomes up to $250,000, and have shown little sympathy for the plight of the top 2% of income-earners who would pay an extra 4 cents on every dollar above that threshold.

But the fact that Boehner couldn’t even make good on a threat that wasn’t going to work is just embarrassing, and would be funny if it weren’t for the havoc the House GOP’s stubbornness could wreak on the economy. If no deal is reached, and the Bush tax cuts for everyone expire on January 1, there are some who think that House Republicans will suddenly have some political room to maneuver, and pass a retroactive middle-class tax cut, but this Bad News Bears infield of a  House Republican caucus doesn’t inspire much confidence.