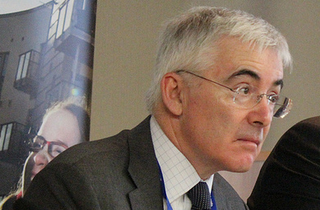 A British government official apologized this week after saying in leaked audio that there are some people, referring to disabled persons, who are not “worth the full wage” and could probably survive on less than the minimum wage.

In audio obtained by the BBC, Freud said, “There is a group, and I know who exactly what you mean, where actually as you say they’re not worth the full wage, and actually I’m going to go and think about that particular issue, whether there is something we can do nationally and without distorting the whole thing, which actually if someone wants to work for two pounds an hour and it’s working…”

According to a British government website, the current minimum wage for persons 21 and over is £6.50 (about $10.50 USD).

The comments were disclosed by Labour leader Ed Miliband this week, and there have since been calls for Freud to resign from the political opposition. Freud hasn’t stepped down, but he did issue this apologetic statement:

I would like to offer a full and unreserved apology. I was foolish to accept the premise of the question.

To be clear, all disabled people should be paid at least the minimum wage, without exception, and I accept it is offensive to suggest anything else.

I care passionately about disabled people. I am proud to have played a full part in a government that is fully committed to helping disabled people overcome the many barriers they face in finding employment. I am profoundly sorry for any offence I have caused to any disabled people.

You can listen to Freud’s comments below, via the BBC: